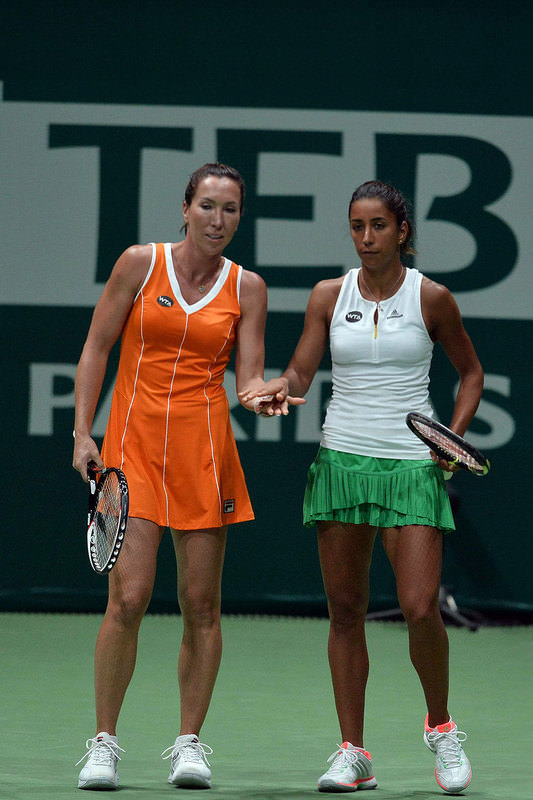 In the last match of the fourth day at the Garanti Koza Arena, Çağla-Jankovic broke their opponents' serve twice and with the support of the audience, they won the first set 6-4.

The second set was tougher but Çağla and her experienced partner Jankovic broke their opponents' serve in the eighth game one more time to lead 5-3. After one hour and 19 minutes, Çağla-Jankovic managed to win the match 2-0.

Çağla Büyükakçay-Jelena Jankovic will play against Ayla Aksu/Melis Sezer on Saturday to proceed to the next round. With this draw, a Turkish player is guaranteed to play in the semi-finals of the TEB BNP Paribas Istanbul Cup. This match will be the last of the day.

It's almost the end of the TEB BNP Paribas Istanbul Cup and on Sunday the trophies will be handed out.

With the support of the Turkish Tennis Federation, tennis in Turkey continues to develop every single day and these five players are the milestones of this adventure so far.

İpek Soylu and Çağla Büyükakçay participated in the tournament, being played at Esenyurt Garanti Koza Arena, from the main draw. Melis Sezer, Ayla Aksu and Berfu Cengiz started from the qualification round to the 2015 TEB BNP Paribas Istanbul Cup. İpek Soylu made history in this tournament. Beating Anna Tatishvili and winning the first WTA match of her career, Soylu will be the highest-ranked Turkish tennis player according to the WTA rankings. World no. 146 Çağla Büyükakçay lost to Daniela Hantuchova but she gained the appreciation of the audience because of her competitive nature.

Fifteen-year-old Berfu Cengiz, the youngest player in the tournament, beat Yuliya Beygelzimer 2-1 to proceed to the final round of qualification. Ayla Aksu and Melis Sezer managed to beat Japanese player Misa Eguchi and Polish player Justyna Jegiolka to move to the quarter-finals.

All these achievements shows that tennis in Turkey has improved a lot, mainly thanks to the support of Koza WOS Enka and Koza WOS Esenyurt. There will be free bus services from Avcılar Campus to go to the TEB BNP Paribas Istanbul Cup. It will be possible to come to watch the TEB BNP Paribas Istanbul Cup at the Esenyurt Garanti Koza Arena Esenyurt with the free services.

People who want to watch the match on Saturday can take the bus from Avcılar Campus at 1:00 p.m. to the Garanti Koza Arena. That shuttle goes back at 9:00 pm. On the final day of the tournament, Sunday, shuttles will depart from Avcılar Kampus at 1:00 p.m. At 7:00 p.m, shuttles will make their way back from the Garanti Koza Arena.

Tsvetana Pironkova of Bulgaria was the only seed - the No. 8 and last - to reach the Istanbul Cup quarter-finals. Pironkova defeated Kurumi Nara of Japan 6-3, 1-6, 6-1, then learned fourth-seeded Alize Cornet of France was overhauled by Kirsten Flipkens of Belgium, and fifth-seeded Camila Giorgi lost an all-Italian match with Francesca Schiavone. Flipkens won 2-6, 6-1, 6-2, and Schiavone 6-4, 7-6 (6), for her first quarter-final since February. Ukrainian qualifier Kateryna Bondarenko, who ousted Venus Williams, beat Mona Barthel of Germany 6-3, 4-6, 6-2 in their second-round match.
Last Update: Jul 25, 2015 3:32 pm
RELATED TOPICS