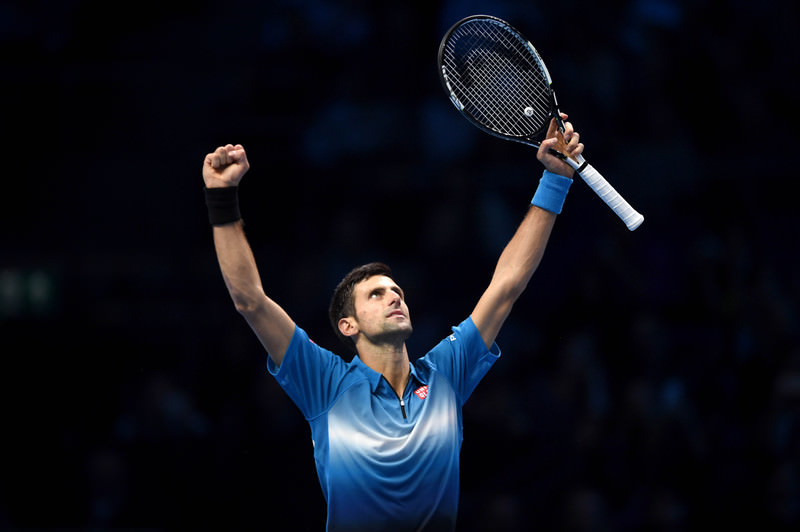 erbia's Novak Djokovic celebrates following his two set win over Spain's Rafael Nadal during their semi final match at the ATP Tour tennis finals. (EPA Photo)
by Nov 21, 2015 12:00 am
Novak Djokovic turned on the style to outclass old adversary Rafael Nadal and reach the final of the ATP World Tour Finals with a 6-3 6-3 victory at the 02 Arena on Saturday.

Spaniard Nadal had looked like his old dominant self with round-robin wins against Andy Murray, Stanislas Wawrinka and David Ferrer, but the world number five was no match for Djokovic who was at his clinical best.

World number one Djokovic, bidding for a fourth consecutive title at the season-ender, and a fifth in total, launched an early onslaught, breaking Nadal's serve in the second game of the match with four sweetly-struck, clean winners.

From then on he was barely troubled by the 14-times grand slam champion who could make little impression.

A dipping backhand forced a Nadal volley error to give the Serbian two break points in the fifth game of the second set and he converted after a fierce baseline rally.

There was no way back from there for Nadal. Djokovic was clearly in a hurry to finish the job, breaking again at 5-3 with a flurry of pinpoint winners.

He will face either Roger Federer or Wawrinka in Sunday's final.