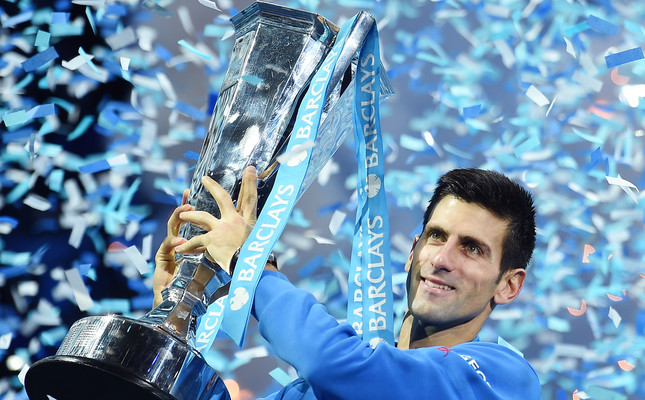 Djokovic, who won three Grand Slam titles this year and reached the final in the other, capped the best season of his career with another superb display, including winning 16 of the 19 points on his second serve and saving both break points he faced.

"I couldn't ask for a better finish of the season," Djokovic said. "For some reason or another, I've been playing some of my best tennis after the U.S. Open, in Asia and also indoors, both Paris and London."

Federer beat Djokovic on Tuesday in the group stage, but the 17-time Grand Slam champion made too many mistakes in the final on Sunday. Federer ended up with 31 unforced errors, including 15 from his usually reliable forehand.

He even gave away the final point with his second double-fault of the match.

"It would have been nice to serve a little bit better early on in the match, play better overall on his second serve, because he does allow you to play on his second serve," said Federer, who lost to Djokovic in the 2012 final and pulled out of last year's championship match against the Serb with a back injury. "Maybe at times I went for too much."

Federer finishes his season with a 6-5 record in finals, with all five losses to Djokovic. Two of those of those came at Wimbledon and the U.S. Open, giving Djokovic his ninth and 10th major titles.

For Djokovic, it was a season to remember.

Besides becoming the first man to win four straight titles at the tournament for the top eight players in the world, Djokovic also will finish the season at the No. 1 player for the fourth time in five years. He won the Australian Open, Wimbledon and the U.S. Open, and reached the final at the French Open.

"Those two rivalries made me a better player, the player I am today, no doubt," Djokovic said. "Made me understand what I need to do both on and off the court to be able to be in this position now."

On the court, both Djokovic and Federer had break chances in the opening two games, but both managed to save them.

The first breakthrough for Djokovic came in the third game. With Federer serving at 30-30, the Swiss player thought he had his first ace of the match. But Djokovic challenged the call, and won.

After a long rally from the second serve, Djokovic hit a backhand winner to get to break point, and then Federer put a forehand into the net.

Djokovic broke Federer's serve two more times, first to win the first set and then to win the second when Federer double-faulted.