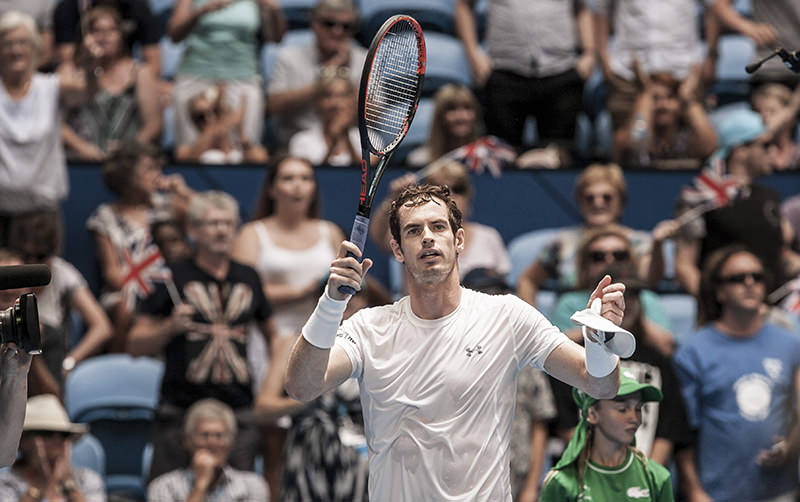 Andy Murray for Great Britain celebrates his win over Alexander Zverev of Germany during the men's singles match between Great Britain and Germany (EPA Photo)
by reuters Jan 12, 2016 12:00 am
British tennis star Andy Murray has helped raise more than 83,000 pounds ($121,000)for Syrian refugee children by donating money for every ace he scored through his Andy's Aces initiative, the U.N. children's agency (UNICEF) said on Monday.

Murray, who is ranked world number two, announced in September he would donate 50 pounds for every ace he hit until the end of 2015.

"I remember watching the news last summer and deciding I wanted to do something to help some of the millions of children whose lives have turned upside down by the situation in Syria," said Murray, who is expecting his first child next month with his wife Kim.

"It's amazing that we've been able to raise so much, and I'm very grateful to my sponsors and fans for their help in this - I couldn't have done it without them," he said in statement.

Murray's donations to UNICEF were matched by his sponsors Standard Life and Under Armour, along with the Lawn Tennis Association and The Association of Tennis Professionals.

The U.K. government also matched all donations made by the British public from Oct. 29 October last year. And additional funds were raised through the Tie Break Tens tournament and the ATP ACES for Charity program.

The money raised by the tennis champion can provide more than 16,000 children with blankets, UNICEF said.

"Almost five years into the conflict, Syria remains one of the most dangerous places to be a child and millions of children have lost loved ones, homes and schools," UNICEF UK executive director, David Bull, said.

"Their world has been turned upside down by the conflict and humanitarian needs are becoming ever more urgent. The support of Andy, his fans and the wider tennis community will help us provide support for children who have lost so much."

Murray is the latest in a line of celebrities to highlight the Syrian crisis, which is entering its sixth year.

Actor Edward Norton has started a Crowdrise campaign and raised more than $450,000 for a Syrian man he called "the Scientist" who had lost seven family members in a deadly attack on his home in Syria, according to the Crowdrise website.

Actress Susan Sarandon spent her Christmas meeting Syrian refugees on the Greek island of Lesbos, in an effort to raise awareness of the refugee crisis.