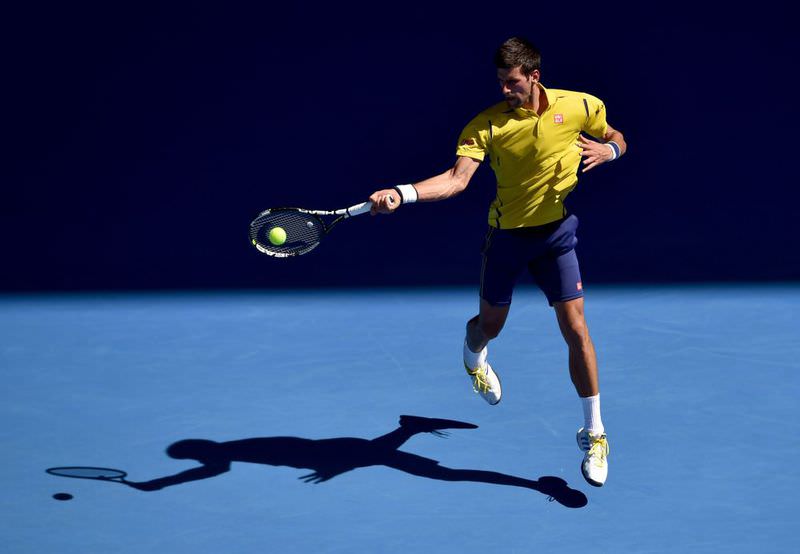 Serbia's Novak Djokovic plays a forehand return during his men's singles match against South Korea's Chung Hyeon on day one of the 2016 Australian Open tennis tournament.
by Daily Sabah with Wires Jan 19, 2016 12:00 am

Secret files expose evidence of widespread suspected match-fixing at the top level of world tennis, including at Wimbledon

Tennis was rocked Monday by allegations that the game's authorities have failed to deal with widespread match-fixing, just as the Australian Open, the first grand slam tournament of the year, kicked off in Melbourne. The BBC and BuzzFeed News alleged that the Tennis Integrity Unit (TIU), which was set up to police the sport, had failed to thoroughly investigate a group of 16 players that bookmakers, foreign police and other investigators had warned it about. The reports said that none of the players all of whom had been ranked in the top 50 had faced any sanctions and more than half would be playing at this year's Australian Open. The players weren't identified by name.

The BBC and BuzzFeed allegations were based on files they reported had been leaked "from inside the sport" showing evidence of suspected match-fixing orchestrated by gambling syndicates in Russia and Italy that had been uncovered during an Association of Tennis Professionals (ATP) investigation of a 2007 match in Sopot, Poland, involving suspiciously high levels of betting. According to the reports, the ATP investigation widened to uncover a network of other players suspected of match-fixing, but officials didn't follow up on the cases. Since then, the reports said, the ATP has repeatedly been warned about many of the same players, but hasn't taken any action against them.

However, tennis authorities have denied suppressing evidence of match-fixing or overlooking suspected cases amid reports on the opening day of the Australian Open, according to AP. At a hastily convened news conference at the tournament yesterday, ATP Chairman Chris Kermode rejected the assertion that match-fixing had gone unchecked, saying the TIU remained "constantly vigilant and not complacent" when it comes to tackling corruption.

Big financial incentives for gamblers, small tournaments of little consequence to top players and the ease of fixing the outcome of a one-on-one sport have helped turn world tennis into a haven for match-fixers, according to experts and industry insiders. Multiple sources told Reuters that the revelation was no surprise to those who closely follow the sport, where, out of the spotlight at small tournaments around the world, the temptations are obvious and malfeasance very difficult to prove.

Dozens of untelevised tournaments are held annually and top players often inexplicably lose to relatively unknown opponents, said Steve Georgakis, a senior lecturer at the University of Sydney, who is researching match-fixing in tennis.

"If you have a look at the big tournaments, the Opens or Olympic Games, you'll notice that in a lot of these tournaments the favorite usually wins," he said. But at a small tournament the following week, how could anyone prove that a top 50 player didn't lose because they were exhausted or injured, said Georgakis.

A highly ranked player is almost certain to be the odds-on favorite to win in these small tournaments and thus has the greatest opportunity to make money by intentionally losing to an outmatched player, handing a big payoff to those behind the fix.

"It's a one-on-one sport and what you do is, you're the favorite and you get a few other people to load up on the other player to win and then you throw the match. And you can never get caught," Georgakis added.

Sports betting has exploded in recent years with the proliferation of online and mobile gambling sites, and could be worth as much as $3 trillion annually, Patrick Jay, an independent betting expert, told the United Nations in 2015. In that sea of money, tennis is the second most active betting market, trailing only soccer, research conducted by the European Gaming and Betting Association shows. Betting on tennis is relatively simple and comes with enormous potential payoffs, a professional tennis gambler told Reuters under the condition of anonymity.

Many bookmakers have created disincentives to bet point-by-point or game-by-game with limits on those types of bets, pushing gamblers towards the payoffs for a winning bet on the overall match.

The top players, too, said they doubted that match-fixing was happening at the elite level of the sport due to enhanced monitoring systems put in place.

"We have, I think, a sport [that has] evolved and upgraded our programs and authorities to deal with these particular cases," top-ranked Novak Djokovic said. "There's no real proof or evidence yet of any active players [being involved in match-fixing], for that matter. As long as it's like that, it's just speculation."

Djokovic did confirm, though, that members of his team in the mid-2000s were approached to throw a match in Russia. "Of course, we [rejected] it right away. It didn't even get to me," he said. Marin Cilic, who won the 2014 U.S. Open, said he didn't believe match-fixing is happening at the top of the sport.
RELATED TOPICS