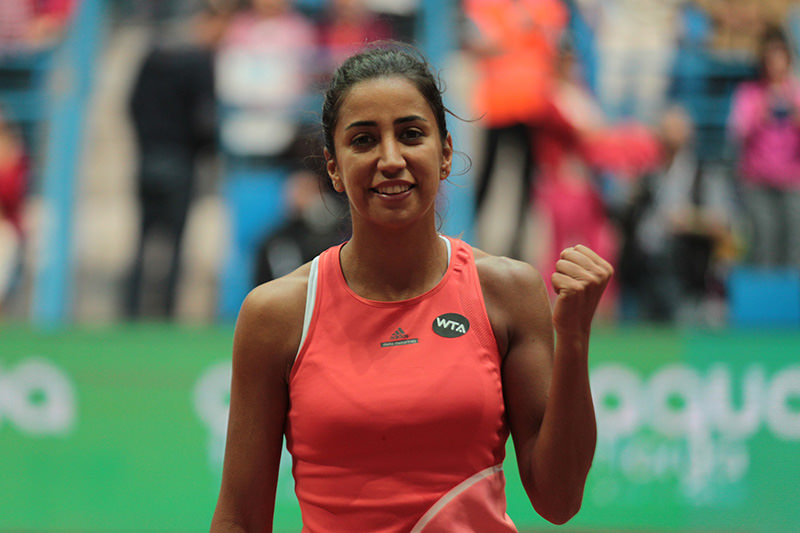 Çağla Büyükakçay became the first Turkish woman to win a Women's Tennis Association title in the final game against Danka Kovinic, but her previous win over Stefanie Voegele also assured her Top 100 debut, all in front of her home crowd

Turkish tennis player Çağla Büyükakçay made history as she became the first Turkish woman to win a Women's Tennis Association (WTA) singles title through a 2-1 win against Danka Kovinic from Montenegro on Sunday.

Büyükakçay previously delighted Turkish fans, roaring out to a big lead and treating the crowd to a tense ending with a 6-0, 7-5 victory over Stefanie Voegele. Büyükakçay turned heads earlier in the year with a run to the third round of the Qatar Total Open - upsetting Lucie Safarova en route - but has been even more impressive at home in Istanbul, running through four matches without losing a set to become the first Turkish woman to reach a Women's Tennis Association (WTA) singles final.

"I was very nervous in the beginning," she admitted after the match. "I was trying to focus on the point all the time; it was hard not to think about the future in the second, when I was 6-0, 2-0 up."

Completely in charge through the opening eight games, Voegele - a former Volvo Car Open semifinalist in 2013 - found her way back to level in the second set, getting within one game of tying things up in the tenth game.

Maintaining an incredibly high first serve percentage, Büyükakçay only missed three first serves through the one hour and 23-minute match, winning 63 percent of her first serve points and converting six of 11 break point chances on return.

"I hadn't noticed, but I was told I was serving over 90%; that must have happened for the first time in my career!"

The top-ranked Turkish star was already the first from her country to reach a WTA semifinal, and Saturday's victory allowed her to go one better, and assure herself of a Top 100 debut.

"It was very important for me to break the Top 100 this match; that's why I was very emotional at the end. I've been working for it for the first time, and I'll be the first woman in Turkish tennis to be Top 100. It's a huge thing for me.

"I saw the Turkish flags around me, and I'm reminding myself all the time that it's perfect to be here, and it's working."

Hoping to inspire other young women from her home country, Büyükakçay discussed her active role as President of the Athlete's Commission through the Turkish Olympic Committee.

"I'm very happy about it because we have to encourage kids to be involved with sports. My role is to help them for their Olympic dreams and to have a good bridge between the athletes and the Olympic Committee, and what we can do together in the future.

"It's an important role for me to be a good athlete, because when I was young I didn't have any role models in tennis. That's why my dreams were very far for me; I didn't have anyone to look up to. But because of me, they can dream that they also can reach a WTA final. We could never dream about it before in Turkish tennis."

Büyükakçay's compatriot İpek Soylu continued the banner week for Turkish tennis as she and partner Andreea Mitu reached the final when Nao Hibino's right shoulder injury forced she and Kurumi Nara to withdraw from the semifinals.