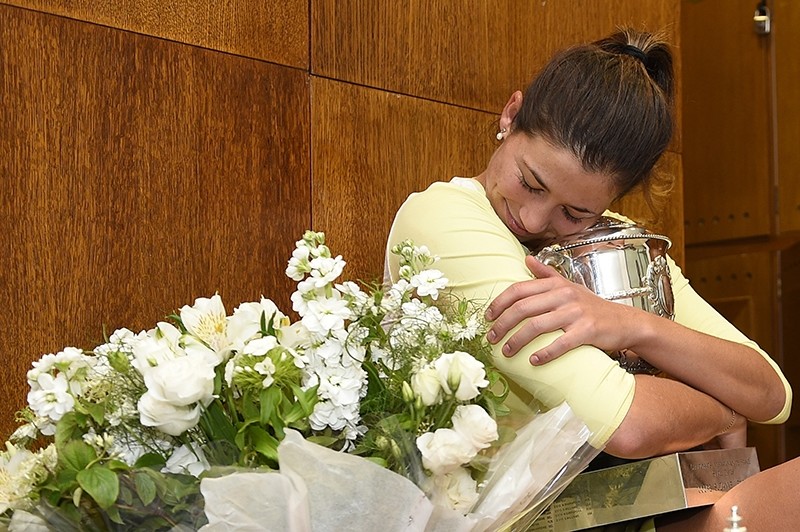 Spain's Garbine Muguruza holds her cup in the dressing room after defeating Serena Williams of the U.S. in the women's final of the French Open. (AP Photo)
by Jun 04, 2016 12:00 am

Garbine Muguruza achieved the rare feat of overpowering world Serena Williams to claim her maiden grand slam title with a 7-5 6-4 win over the world number one and defending champion in the French Open final on Saturday.

The 22-year-old fourth seed, who lost to Williams in last year's Wimbledon final, became the first Spaniard to lift the Suzanne Lenglen Cup since Arantxa Sanchez Vicario in 1998.

"This is the big tournament in Spain and Rafa (Nadal) is our champion," she said courtside, referring to the nine-times men's winner who pulled out injured last week.

"She won the first set by one point. That just goes to show you you really have to play the big points well and I think she played the big points really well," Williams said.

Although her hard-hitting game seems more suited to faster surfaces, Muguruza won 14 consecutive sets en route to the final after losing her opening set of the tournament.

An anxious player by her own admission, she managed her emotions on Court Philippe Chatrier, saving six of eight break points against Williams, who had only lost only four of her 26 previous major singles finals.

It was Muguruza's first final on the slow surface and she relied on a powerful first serve and jaw-dropping winners down the line to subdue the American in a battle of will.

Williams, who was gunning for a professional era record 22nd major title, got off to a solid start, winning her first service game to love and putting pressure on her opponent's serve.

In the fourth game, which lasted nine minutes, Muguruza saved a break point with an unreturnable forehand, then a second with an ace.

An ugly double fault, however, earned Muguruza the first break of the match, which she consolidated by holding serve in the sixth game with a flat forehand winner down the line to lead 4-2.

Williams, 34, stepped into the court and put Muguruza on the back foot, breaking back for 4-4 when Muguruza sent a backhand long.

An unreturnable crosscourt forehand gave Muguruza another break. Serving for the set, she showed early nerves in the 12th game before converting her third opportunity with a sizzling backhand winner.

A weak Williams backhand put Muguruza up a break in the second, only for the Spaniard to serve consecutive double faults as the American broke back for 1-1.

But she unleashed another forehand down the line to regain the advantage and held for 3-1.

Williams saved four match points to hold but on Muguruza's fifth opportunity to seal the contest in the following game she landed a lob on the base line and sank to her knees in apparent disbelief at winning the title.