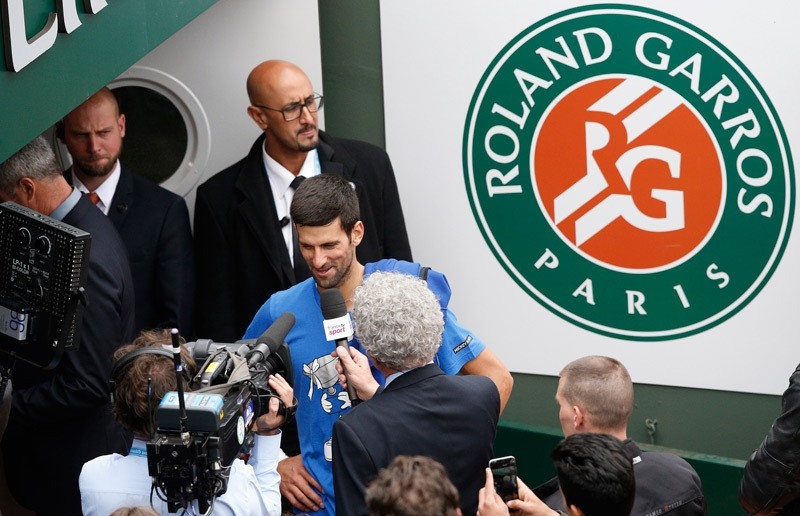 Novak Djokovic and Andy Murray meet in a seventh Grand Slam final on Sunday with the clock ticking on their French Open title aspirations.

World number one Djokovic, the winner of 11 majors, is bidding for a first French Open to become just the eighth man to complete the career Grand Slam.

Victory on Sunday would also give him the 'Novak Slam' as he already holds the Wimbledon, US and Australian Open titles.

But the 29-year-old has lost all three finals he has made in Paris.

Murray, also 29 and a rival of Djokovic since their junior days, has previously fallen three times at the semi-final stages.

The last British man to win in Paris was Fred Perry in 1935 while Bunny Austin was the last finalist from his country in 1937.

"It's obviously a very big match for both of us. Novak trying to win the career slam and me trying to win my first French Open," said Murray, aware that even Roger Federer needed 11 visits to Paris to win his first and only French Open.

When Federer finally broke through -- and completed the career Grand Slam in 2009 -- he was already 27.

"Neither of us know how many more chances we'll have to win here. It took obviously Roger a long time to win this one.

"It's a very tough event to win. There is a lot riding on the match for both of us."

Djokovic was runner-up to nine-time winner Rafael Nadal in 2012 and 2014 and was stunned by big-hitting Stan Wawrinka 12 months ago.

He will be playing in his 20th Grand Slam final and seventh against Murray having won four times against the Scot in Australia but losing at the US Open in 2012 and Wimbledon in 2013.

If he does finally break his drought in Paris, he will be the second oldest to complete the career Slam after Andre Agassi who managed the feat in Paris in 1999.

"I put myself in a position in which I wanted to be in of course ever since last year's final," said Djokovic, who has already set one impressive benchmark in Paris by reaching the $100 million prize money barrier.

"It's always high on the priority list when I start a season thinking about Roland Garros."

Djokovic has dropped just one set at the French Open this year and he shrugged off having to play four days in succession by blitzing young Austrian Dominic Thiem 6-2, 6-1, 6-4 in Friday's semi-final.

Murray, who lost in five sets to Djokovic in last year's semi-finals, also came off worse in straight sets against Nadal in 2011 and 2014.

His path to Sunday's final, his 10th at a Grand Slam, has been more tortuous than the Serb's.

He had to come from two sets down to beat 37-year-old Radek Stepanek in the first round and needed another five sets to beat French wildcard Mathias Bourgue in the second.

Two four-setters followed to see off Richard Gasquet in the last-eight and Wawrinka in the semi-finals.

Murray has spent close to 18 hours on court to get to Sunday's final.

Despite trailing 23-10 in career meetings with Djokovic, the Scot enjoyed a morale-boosting win on clay in the Rome final last month.

Djokovic had come out on top in the Madrid final, also on clay, the previous week after the Serb had also swept to victory in the Australian Open final in January.

"Novak obviously plays great on all of the surfaces. But this is a new experience for both of us," said Murray, the 10th man to have reached all Grand Slam finals.

"We only played once here before. It was a pretty tight match last year in the semis. So I expect a very, very tough match on Sunday.