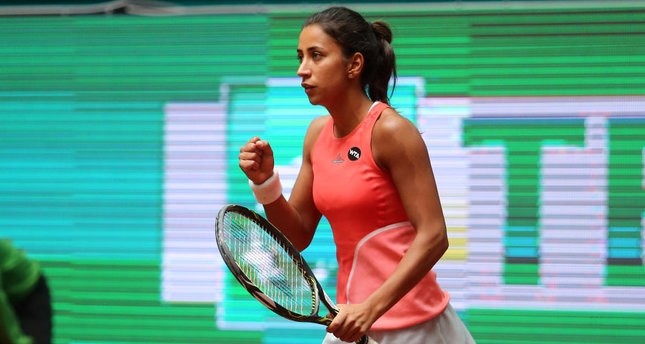 Çağla Büyükakçay has become the first Turkish female tennis player to represent Turkey at an Olympics. The 26-year-old player, who is ranked 73rd in the world rankings, booked her place in Rio after Romanian player Simona Halep withdrew from the Olympics over the Zika virus

Turkey's number one tennis player Çağla Büyükakçay continues to make Turkish history. Büyükakçay, who became the first Turkish female tennis player in the Open era to reach the second round of a Grand Slam after beating her opponent two sets to one in the French Open in Paris on May 24, marked another first yesterday. She will become the first female tennis player to represent Turkey in the Olympics after she qualified for Rio 2016. The 26-year-old player who is ranked 73rd in world ranking got a ticket to Rio after Romanian player Simona Halep withdrew from the Olympics over the Zika virus. She also made history as she became the first Turkish woman to win a Women's Tennis Association (WTA) singles title through a 2-1 win against Danka Kovinic from Montenegro on April 24.

Others who have opted to skip the games include Americans John Isner and Sam Querrey and the Australian pair of Bernard Tomic and Nick Kyrgios. Jordan Spieth, Jason Day, Dustin Johnson and Rory McIlroy said Zika was the main reason for skipping the first Olympic golf tournament in 112 years.

Halep said, "Family is much too important for me and I can't risk not being able to have one of my own after my career in tennis is over." Berdych also said that while his plan may disappoint fans, "it's a personal decision and I feel the need to give at least one of the serious reasons leading to this step. Wimbledon finalist Raonic blamed Zika fears for his choice to skip what would have been his second Olympics." Raonic, called his move "a difficult, personal choice and I do not wish for it to impact the decision of any other athlete heading to the Games. "I'm very proud to have competed for Canada at the London 2012 Summer Olympics, and on the world stage at several Davis Cup events. I look forward to cheering on Team Canada this summer," he said. "As I have started a family [recently married] to limit health risks toward my nearest is the upmost priority. I have done this out of responsibility to my family."

The head of the Rio de Janeiro Olympics says the world's top four male golfers have withdrawn from the games because there is no money to be won - not because of the Zika virus. "They tried to blame Zika, but the media have shown that they are not coming because there's no prize money," Rio organizing committee President Carlos Nuzman said Saturday, speaking with the games set to open in just under three weeks.

Their absence could be a setback for golf's future in the Olympics. International Olympic Committee (IOC) President Thomas Bach has said that golf's future may rest on its ability to get top players to show up.

Golf is guaranteed a spot in the Tokyo Olympics in four years, but could be vulnerable after that.

"Zika is much worse in Florida than in Brazil, and golfers are playing in Florida," Nuzman said.