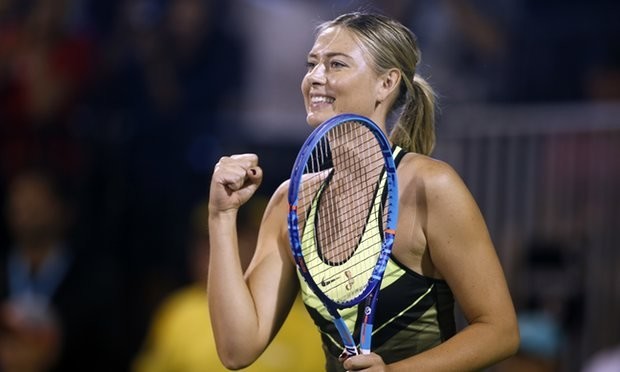 by Oct 12, 2016 12:00 am
Maria Sharapova set foot on a tennis court for the first time since her positive drug test at the Australian Open on Monday, smiling throughout an appearance in the World Team Tennis Smash Hits charity event in Las Vegas.The Russian star, who last week earned a reduction in her drug ban that will allow her to return to tennis in April, played in two light-hearted doubles matches in the event at Caesar's Palace to benefit the Elton John AIDS Foundation. Sharapova lost her doubles match with American youngster Taylor Johnson when they faced Martina Navratilova and Liezel Huber. The 29-year-old indicated had felt a hint of nerves along with her 16-year-old doubles partner Johnson.

"It was a big occasion for her (Johnson) and also for me," Sharapova told ESPN.

"I haven't been on a court for a while, for both of us, it was to have some fun and a bit of laughs," she added.

Sharapova later paired with U.S. legend John McEnroe in the evening's final game against Navratilova and Andy Roddick. Sharapova had not played since testing positive for meldonium at the Australian Open in January. Her initial 24-month ban was slashed to 15 months by the Court of Arbitration for Sport last Tuesday, a ruling which has divided opinion among her peers.
Last Update: Oct 12, 2016 1:45 am
RELATED TOPICS