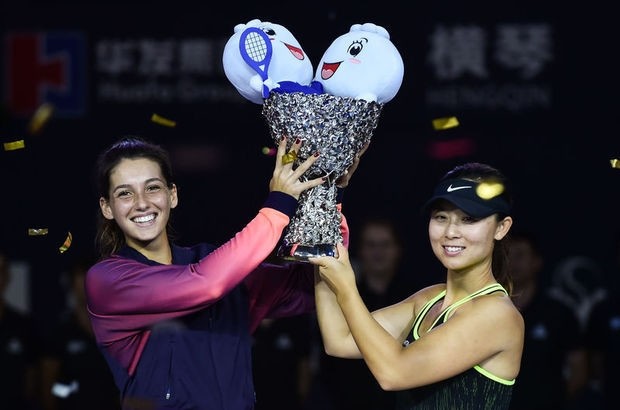 The Elite Trophy tournament, featuring both singles and doubles is organized by the WTA and was held in the Chinese city of Zhuhai. No. 2 seed İpek Soylu and her partner Xu Yifan faced No. 6 seed Yang Zhaoxuan and You Xiaodi of China in the doubles final.

A tie break set was needed, after the Soylu-Xu pair won the first set 6-4, and Yang-You won the second 6-3. The 10-7 match lasted for an hour and 27 minutes and ended in a 2-1 victory for İpek and Xu.This was İpek's third championship title at the WTA doubles tournament, following the TEB BNP Paribas Istanbul Cup and Taşkent Open in 2016.

"İpek Soylu has broken new ground by claiming the WTA title in China. She has made and continues to make real progress in both singles and doubles categories," said TTF Chair Durmus.

Meanwhile, Petra Kvitova picked up her second Chinese title of the season as the Czech defeated Elina Svitolina of Ukraine 6-4, 6-2 on Sunday to win the WTA Elite Trophy, featuring players ranked between ninth to 20, who had missed qualification for the WTA Finals in Singapore.

The two-time Wimbledon champion ended her season on a high as the win saw her climbed to No. 11 from 13 in the latest WTA rankings.

Her hard-earned victory over the promising Ukrainian opponent took 70 minutes, with the winner firing five aces but committing six double-faults.

Kvitova, who reached the final without the loss of a set, broke the 14th-ranked Svitolina five times to earn her second title of 2016, following last month's success in Wuhan. She now won a total of 19 career titles.

"China's a lucky place for me! It's an amazing week and I'm really lucky I was able to compete here," Kvitova said.

"She played a little bit more aggressively than me in the beginning. I was trying to get my rhythm back. Then, I started to serve a little bit better as well, even if I had more double faults than I wanted. I was just trying to play point by point," Svitolina said. Kvitova has three titles from six finals in the region. The 26-year-old now leads the series with Svitolina 6-1 after the pair faced off for the fourth time this season.

Germany's Angelique Kerber continued her lead at the top while Britain's Johanna Konta boosted her spot in the top 10 according to the latest WTA world rankings released Monday. Kerber ends the season on 9,080 points after winning her first two grand slams. American great Serena Williams trails in the second position on 7,050. Konta was the only member of the top 10 in action at the second-tier season-ending WTA Elite Trophy last week and added more points to her tally by reaching the semi-finals, losing to Petra Kvitova. The two-time Wimbledon champion Kvitova moved up to 11th from her 13th position after beating Elina Svitolina in the final.