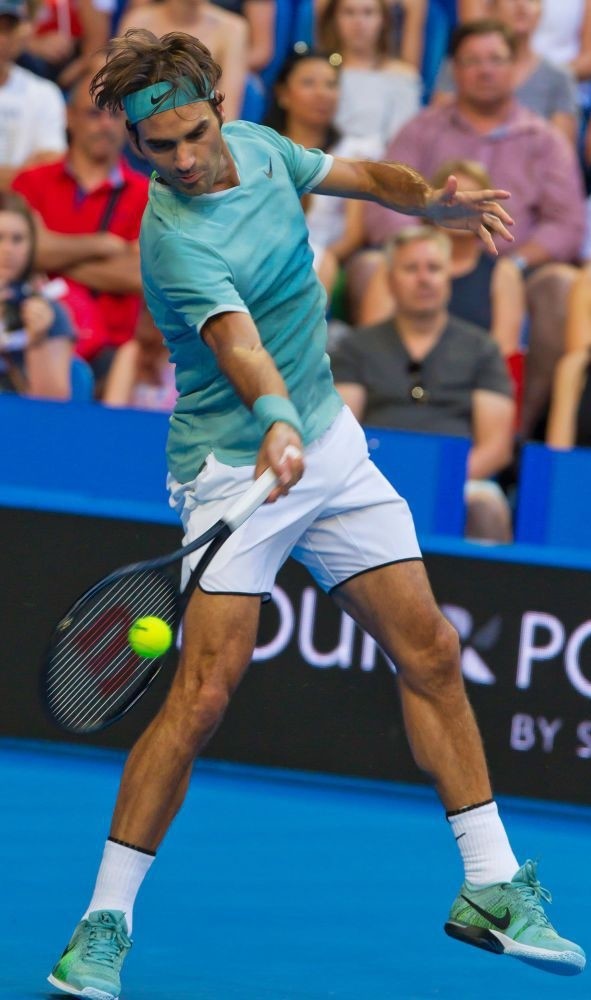 The 17-time grand slam winner defeated Briton Dan Evans 6-3, 6-4 to mark his return to tennis after six months away with a winning rubber for Switzerland at the Hopman Cup in just over an hour

Roger Federer showed no signs of rust in his first competitive match for six months when he outclassed Dan Evans 6-3 6-4 at the Hopman Cup yesterday. The 17-time grand slam winner underwent knee surgery in February and, after missing the French Open with a back injury, announced in July that he needed extensive rehabilitation and would be sidelined for the rest of the season. Federer walked out to a standing ovation from more than 13,500 fans at the Perth Arena and breezed to an easy win over Evans, putting Switzerland 1-0 ahead in their match against Britain in the mixed team event.

"The standing ovation coming in, it was very special. I'm here now enjoying and looking forward to the week of course," the 35-year-old said in a courtside interview. Asked what keeps him going, Federer said; "I guess it depends also on how you get hurt. I got hurt filling up a bath for my children. It's not really the way I wanted to leave this game." The former world number one, who has slipped to 16th in the rankings, said he enjoyed the time out but had started to miss tennis.

"You can't be more happy to return back on a Centre Court, taping your ankles, tying your shoes and walking out and getting that kind of welcome," he said. Federer has not won a grand slam title since Wimbledon in 2012. "It would be nice to win another one, of course I'd even take two-three-four," he said. "It's tough at the top. A lot of good guys are there right now, a lot of young guys are coming up too. The gap's definitely not very big but I gave it chance. Let's see what happens." Elsewhere, Rafael Nadal has altered his preparation for the Australian Open, hoping a change of venues for the warmup tournaments will bring a change of luck at the season's first Grand Slam tournament after a shocking first-round exit in 2016. Nadal kicked off his season with a win in an exhibition tournament in Abu Dhabi on New Year's Eve, then headed directly to Australia to fine-tune at the Brisbane International in preference to remaining in the Gulf for the event in Doha.

"I played well in Abu Dhabi ... I played three good matches, and that's important for me," Nadal said yesterday after the brief meet-and-greet with a local politician and a native marsupial. "I really hope the good matches I played in Abu Dhabi helps me for here." The 30-year-old Spaniard is playing in Brisbane for the first time, replacing Roger Federer as the tournament's male draw card. He has a tricky opener against Alexandr Dolgopolov and, if he gets through that, a potential quarterfinal against top-seeded Milos Raonic, the defending champion.