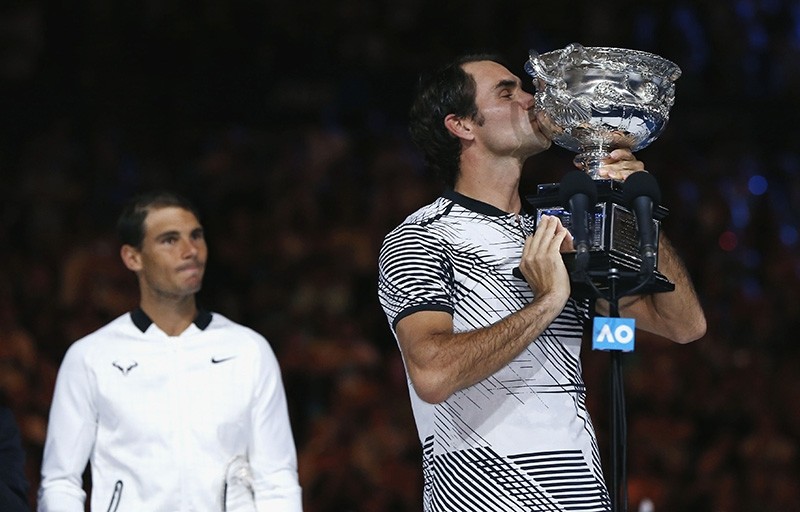 Roger Federer defied age and his Grand Slam nemesis Rafael Nadal to win a record 18th Grand Slam title in a thrilling, five-set final at the Australian Open on Sunday.

The veteran Swiss jumped for joy and cried tears of happiness as he sealed the win on his second championship point, ending a five-year wait for a big victory after Wimbledon in 2012.

Neither Federer nor Nadal, 30, was expected to reach the final but both players grabbed their chance after the early demise of top seeds Andy Murray and Novak Djokovic.

And it was a final for the ages as momentum shifted from one side to the other before Federer finally seized control in the deciding set.

"That is a milestone in my career, they are always epic matches against Rafa," said Federer, adding: "Rafa has caused me the most problems in my career."

For Federer, it sealed an astonishing comeback from six months out with injury. His fifth Australian title came seven long years after his last, against Murray in 2010.

"Tennis is a tough sport, there's no draws. But if there was going to be one I would have been very happy to accept a draw tonight and share it with Rafa, really," Federer said.

Federer becomes the oldest major champion since Ken Rosewall won the Australian Open in 1972 at the age of 37.

His ranking has dipped to 17 after a knee problem ended last season following Wimbledon, but he will now rise to 10 when the new rankings are released this week.

It was the 35th meeting between the two long-time rivals with Nadal now leading 23-12 and 6-3 in major finals, including his five-set win over Federer in the 2009 Australian final.

"I would have said a great event would be making the quarters," Federer said of his pre-tournament expectations.

"Today I just drove myself forward, I said, "Believe in it, run for the ball. Serve and run, serve and run. Just fight and see if you get lucky.

"I did, really got lucky tonight."

Nadal, who has also come back to form and fitness after an injury-ravaged 2016, has held the edge over Federer in major finals, winning their last four.

"It's amazing how well he's playing after being away for so long. For sure, you have been working a lot to make that happen. I am very happy for you," Nadal told the crowd.

"It was a good month for me, amazing month for me, really enjoyed it. I worked very hard to be where I am today. Probably Roger deserved it a little bit more than me."

"I'm just going to keep on trying. Feel like I'm back to a very high level. I'll keep fighting this season."

Federer, playing aggressively and with a flatter backhand than normal, took the match to Nadal and got the only service break to take the opening set.

Nadal fought back with two breaks to level before Federer got the bit between his teeth with a double break in the third set.

He again broke the Swiss early in the final set but Federer stirred himself and broke Nadal twice before serving out for a brilliant and emotional victory.

Federer, considered by many as the finest player in tennis history, is now the first man to win five or more titles at three different Grand Slam events.

He has collected five Australian Opens, seven Wimbledon's, five US Opens and one French Open in a span of victories which now stretches across 14 years.