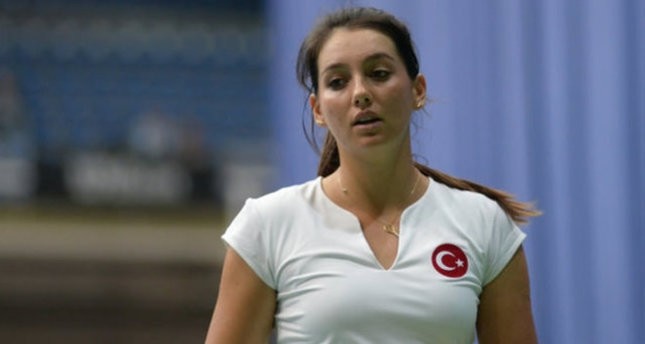 Çağla Büyükakçay and İpek Soylu return to the French Open one year after they became the first Turkish women to make it to the main draw of a Grand Slam event. They will be joined by newcomer Başak Eraydın as the trio seeks to reach the finals

When French Open starts today there will be three Turkish women to represent the country. Çağla Büyükakçay, İpek Soylu and Başak Eraydın are confident they will be successful.

Büyükakçay and Soylu already left their mark in the tournament last year, becoming the first Turkish women to make it the main draw of a Grand Slam tournament.

The tournament, the only Grand Slam played on a clay court, gives Büyükakçay an opportunity to prove her mettle as she is only Turkish player to join the event from the main draw.

After rising to the 60th spot last year, she is looking forward to cementing her place in the world of women's tennis.

İpek Soylu will play qualifiers for the main draw in singles and she will also represent Turkey in couples.

No male players were qualified for the tournament as Marsel İlhan, the only male player lost at the Australia Open.

Before leaving for France for today's qualifying rounds, the trio spoke to Anadolu Agency.

Büyükakçay, who is currently ranked 157th in the world, says the French Open represents an important place in her career.

"I want to reach new heights," she said, adding that the clay court is more advantageous for her.

"I broke the curse in last year's qualifiers. I made historic firsts in my career on a clay court and I hope I will repeat my past performance in Paris," she said.

İpek Soylu also counts on being successful when it comes to playing on a clay court.

Currently in the 155th spot in the world rankings, Soylu said she looked forward to making it to the main draw.

"I feel most comfortable while playing on a clay court. Last year was a career first for me and it was beautiful. I plan to go as far as I can. In couples, I believe I can contest a good fight in the company of my partner Oksana Kalashnikova," she said.

For Başak Eraydın, playing in a Grand Slam is her chance "to play more at such tournaments."

"I succeeded after struggling a lot and I am aware that it won't be easy but I am confident," Eraydın said.