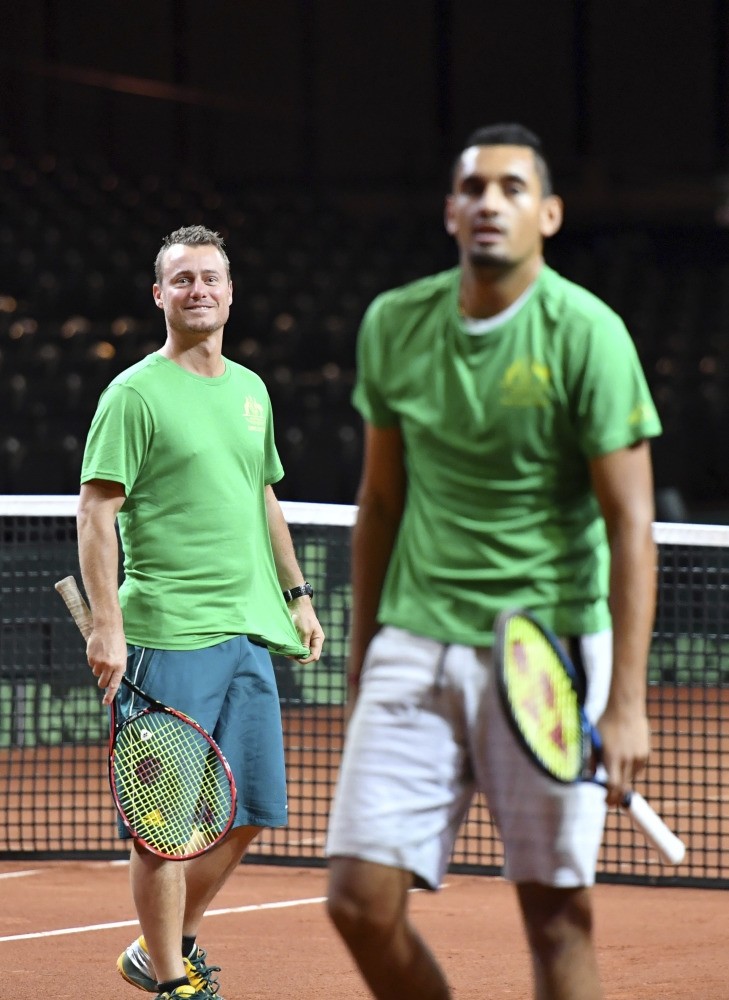 Team Australia's Nick Kyrgios (R), and team captain Lleyton Hewitt participate in a practice session prior to the Davis Cup World Group tennis semifinal in Brussels.
by Sep 15, 2017 12:00 am

After a pause of five months, Davis Cup competition resumes at the semi-final stage today, with Australia travelling to Belgium, while depleted France host Serbia in Lille. Winners this weekend in the worldwide team competition will line up in the final Nov. 29-31.

Lleyton's Hewitt Australia are desperate for a first final since 2003, with volatile but talented Nick Kyrgios back in favor with the captain. Meanwhile, fellow problem child Bernard Tomic, who has dropped from 17th to 146th in the AT rankings, has been snubbed for a bad attitude and obvious lack of 2017 results. Kyrgios will be backed up by Jordan Thompson, Thanasi Kokkinakis and world doubles number two John Peers, a U.S. Open semi-finalist. Belgium are sticking with the side that beat Italy in the quarters: David Goffin, Steve Darcis, Ruben Bemelmans and Joris De Loore as the hosts in Brussels aim for a third final.

The non-participation of household names is evident in the France-Serbia tie, with the French without injured Gael Monfils, while Serbia are missing Novak Djokovic, who will not play again until January due to an elbow injury and the birth of his second child. French captain Yannick Noah and will depend on Jo-Wilfried Tsonga and Lucas Pouille with Nicolas Mahut and Pierre-Hugues Herbert taking on the key doubles duties. Besides former number one Djokovic, Serbia will travel without Viktor Troicki and Janko Tipsarevic.

As a result playing captain and doubles ace Nenad Zimonjic has chosen Dusan Lajovic plus first-time nominee Laslo Djere and Filip Krajinovic in an upset bid. In World Group play-offs, Marin Cilic will lead 2016 finalist Croatia against Columbia, Kazakhstan play Argentina, and Japan take on Brazil. Switzerland are without Roger Federer or Stan Wawrinka in a tie with Belarus, Canada minus injured Milos Raonic host India, Germany face Portugal, the Czech Republic clash with the Netherlands, and Russia play Hungary.