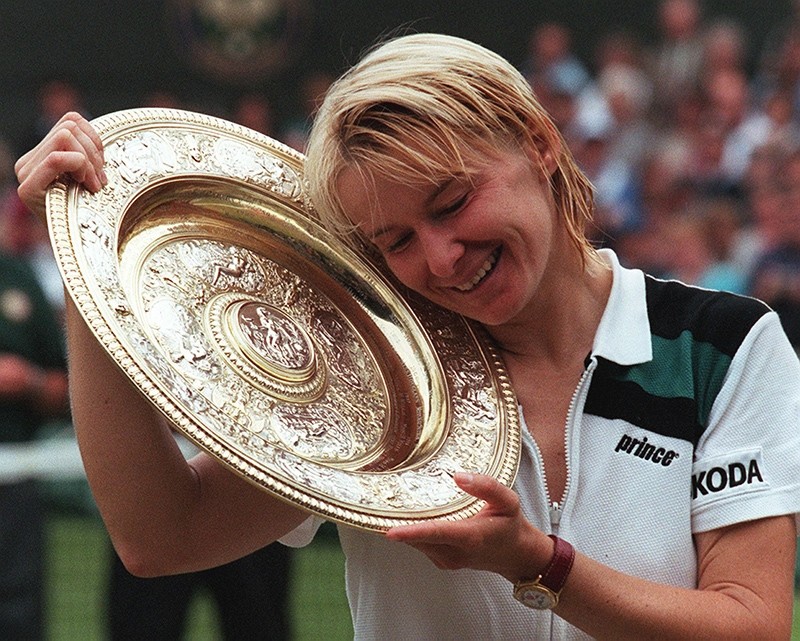 This file photo taken on July 4, 1998 shows Czech Republic's Jana Novotna enjoying her championship trophy after winning the final of the women's singles at the Wimbledon Tennis Championships. (AFP Photo)
by Associated Press Nov 20, 2017 12:00 am

Jana Novotna, who won the hearts of the tennis world by sobbing on the shoulder of a member of the British royal family after a tough loss in the Wimbledon final, has died at the age of 49.

Her family confirmed her death to the Czech Republic's CTK news agency.

Novotna won her only Grand Slam singles title at Wimbledon in 1998, eventually triumphing after two losses in the final at the All England Lawn Tennis Club in 1993 and 1997. She also lost in the 1991 Australian Open final.

The 1993 loss to Steffi Graf at Wimbledon was particularly painful for Novotna, who wasted a commanding lead in the decisive third set. She couldn't keep her emotions in check at the prize giving ceremony, crying on the shoulder of the Duchess of Kent and endearing her to the crowd.

"Jana was an inspiration both on and off court to anyone who had the opportunity to know her," WTA chief executive Steve Simon said. "Her star will always shine brightly in the history of the WTA. Our condolences and our thoughts are with Jana's family."

During a 14-year professional career, Novotna won 24 singles titles and reached a career-high No.2 in the singles rankings in 1997. She won just that one Grand Slam singles title but collected 16 slam titles in doubles and mixed doubles and was a top-ranked doubles player.

She was also a three-time Olympic medalist and won the Fed Cup with her country in 1988. Novotna was inducted into tennis' Hall of Fame in 2005.

Novotna retired in 1999 but stayed around tennis, becoming a commentator and a coach. Seven years ago, she returned from Florida to her Czech home town of Brno.

"I'm dependent on tennis," she said in an interview two years ago. "A day without it would be terrible."