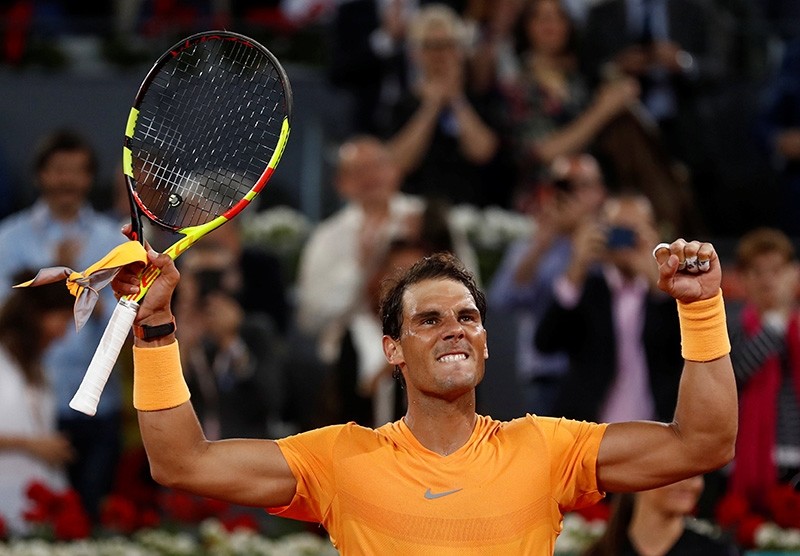 Spain's Rafael Nadal celebrates winning his third round match against Argentina's Diego Schwartzman at the Madrid Open on May 10, 2018. (Reuters Photo)
by May 10, 2018 12:00 am

Nadal's comfortable 6-3, 6-4 victory moves him into the quarter-finals in the Spanish capital and means he sets a new Open era best for the longest streak of victorious sets on a single surface.

McEnroe's 49-set winning streak on carpet in 1984 included him clinching the Madrid Indoor Open title and Nadal may well be about to follow suit.

He will play Austria's Dominic Thiem on Friday for a place in the last four.

Nadal had insisted before the match this latest milestone had barely crossed his mind but if nothing else, it is testament to the 31-year-old's relentless consistency over the past 12 months.

The run includes tournament triumphs in Barcelona, Monte Carlo and last year's French Open, where he will be the clear favorite later this month to claim a 17th major crown.

Schwartzman, ranked 16th in the world, briefly threatened a comeback on Manolo Santana court when he broke back at 4-3 in the second set.

But the Argentinian double-faulted to give his opponent a second break in the very next game, as Nadal sealed a straightforward victory in an hour and 44 minutes.