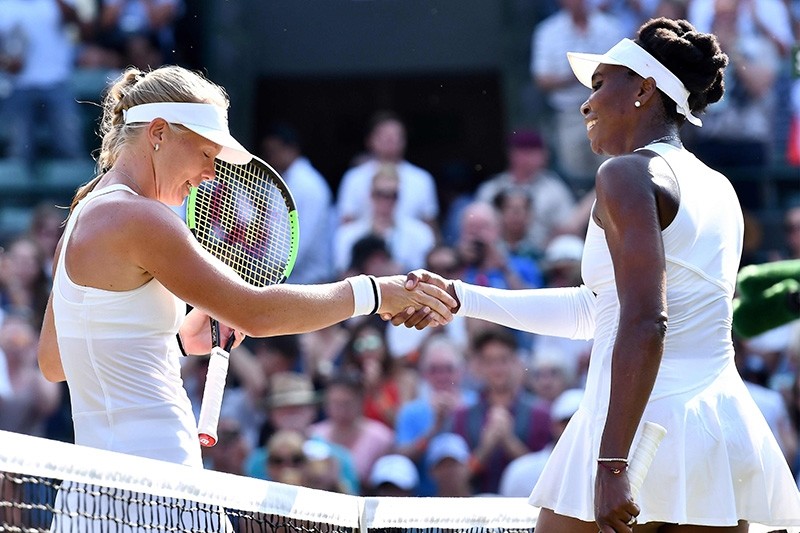 Netherlands' Kiki Bertens (L) shakes hands after winning against U.S. player Venus Williams during their women's singles third round match on the fifth day of the 2018 Wimbledon Championships at All England Lawn Tennis Club in Wimbledon. (AFP Photo)
by Compiled from Wire Services
Jul 06, 2018 12:00 am

Venus Williams suffered a stunning Wimbledon exit as the five-time champion became the latest star to crash out in a 6-2, 6-7 (5/7), 8-6 defeat against Kiki Bertens on Friday.

After reaching the final last year and the semi-finals in 2016, Venus was expected to mount another strong challenge for the Wimbledon title.

But instead the 38-year-old was worn down by Dutch 20th seed Bertens in a dramatic third round clash lasting two hours and 40 minutes in sweltering heat on Court One.

Venus Williams' sister Serena Williams is the only past Wimbledon champion remaining in the field, after Petra Kvitova, Maria Sharapova and Garbine Muguruza were eliminated earlier.

Serena Williams ran her Wimbledon winning streak to 17 matches and moved into the fourth round with a 7-5, 7-6 (2) victory over 62nd-ranked Kristina Mladenovic of France, thanks in part to 13 aces.

Seven of Williams' 23 Grand Slam singles titles have come at the All England Club, including the last two times she played in the grass-court tournament, in 2015 and 2016. She sat out Wimbledon last year while pregnant.

The 36-year-old American will face another mother in the fourth round Monday: 120th-ranked qualifier Evgeniya Rodina of Russia, who upset No. 10 seed Madison Keys of the U.S.