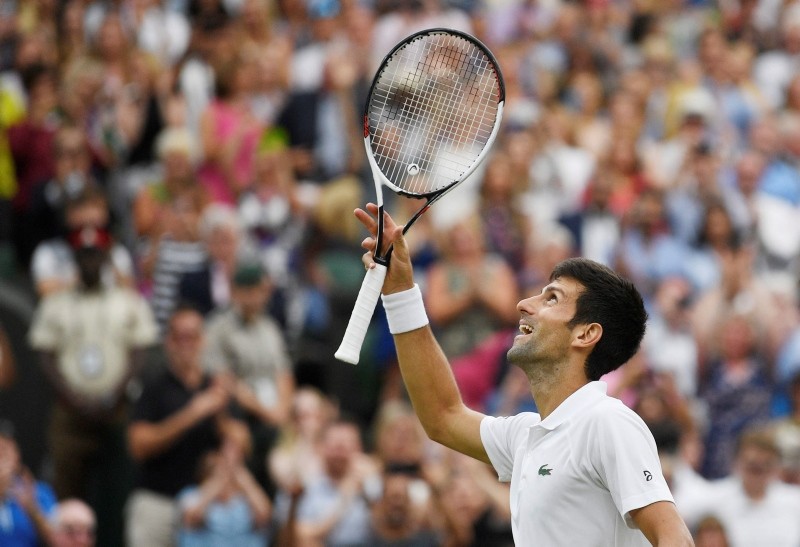 Novak Djokovic of Serbia reacts after beating Rafael Nadal of Spain in their semi final match during the Wimbledon Championships at the All England Lawn Tennis Club, in London July 14, 2018. (EPA Photo)
by Compiled from Wire Services
Jul 14, 2018 12:00 am

Novak Djokovic sent the strongest signal yet that he is back at full strength by reaching his fifth Wimbledon final with a 6-4, 3-6, 7-6 (9), 3-6, 10-8 victory over rival Rafael Nadal on Saturday in a match suspended overnight.

Djokovic is bidding for a fourth championship at the All England Club and 13th Grand Slam title overall.

He'll face Kevin Anderson in Sunday's final. Anderson beat John Isner in a 6½-hour semifinal that ended at 26-24 fifth set Friday night, pushing back the start of Djokovic vs. Nadal.

The second semifinal then was halted when the third set ended just past 11 p.m., because of a neighborhood curfew. It had started with Centre Court's retractable roof closed and so concluded that way, too, even though there was no hint of rain.

Djokovic hasn't won a major in more than two years, dealing with an injured right elbow that was so painful in 2017 he quit his quarterfinal at Wimbledon and sat out the rest of the season.

He had surgery in February, but his results were still shaky. Until now, that is.

Undaunted by losing his lead and being forced to an extra set, Djokovic saved break points at 4-all and 7-all in the fifth, before breaking Nadal at love to end things.

Nadal and Djokovic's battle was the second longest semifinal ever played at Wimbledon, just a day after Kevin Anderson and John Isner set the record for the longest.

Anderson and Isner's epic on Friday ran to 6 hours and 36 minutes, the second longest Grand Slam singles match ever played.

On Saturday, Nadal and Djokovic went past the previous second longest of 4 hours and 44 minutes when Djokovic defeated Juan Martin del Potro in 2013.