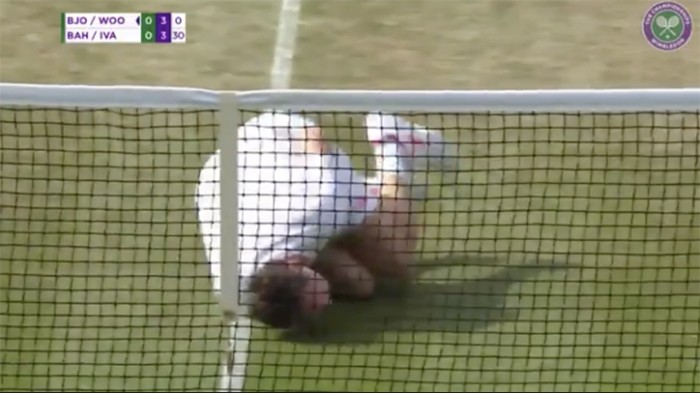 Brazilian football star Neymar's play-acting at the 2018 World Cup in Russia made him the subject of plenty of jokes, and also has also started a trend in online videos of football teams, athletes and other people faking injuries, making swan-like dives, howls, gravity-defying spins and rolls. The trend spread like wild fire on social media with the #NeymarChallenge.

The latest player to mock Neymar's over-the-top histrionics was tennis star Jonas Bjorkman, who decided to do his own impression of the Brazilian in a third-round senior doubles match against Mansour Bahrami and Goran Ivanisevic on Thursday at Wimbledon.

After being struck on the back by a ball hit by his doubles partner Todd Woodbridge, Bjorkman laughed about it with his partner, clearly showing that he was not hurt by the little accident. However, he then grabbed his stomach, dramatically threw himself on the floor and started rolling around on the court – reminding all of Neymar's reaction to a tap on the leg by Miguel Layun in Brazil's round-of-16 match against Mexico.

One of Bjorkman's opponents, Mansour Bahrami, then decided to play on, climbing over the net to do mock CPR and mouth-to-mouth resuscitation to Bjorkman.

The little homage to Neymar left commentators chuckling and drew laughter from spectators.

Neymar was calculated to have spent almost 14 minutes on the turf injured or simulating injury during Brazil's five games at the tournament.

The football star has been rumored to move to Real Madrid, however such speculations were dismissed by the Spanish side a few days ago.

Neymar moved to Paris Saint-Germain from Real's arch-rivals Barcelona in the summer of 2017 for a world-record 222 million euros.