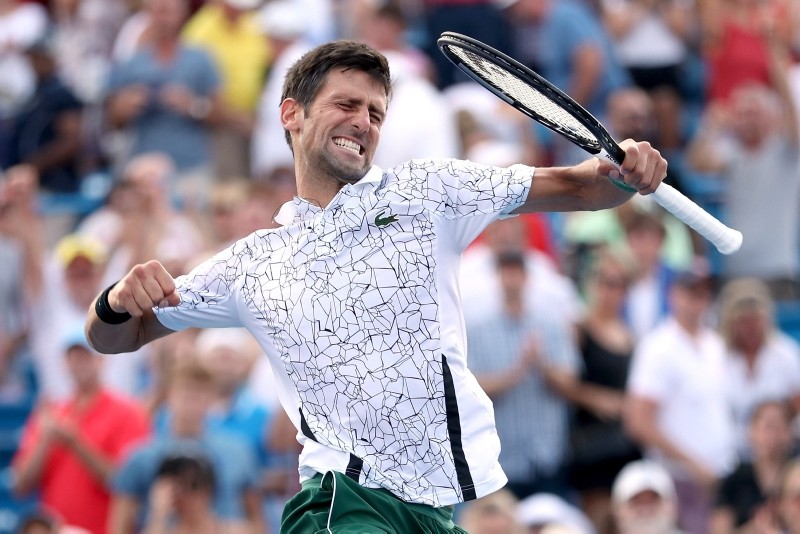 Novak Djokovic of Serbia celebrates his win over Roger Federer of Switzerland during the men's final of the Western & Southern Open at Lindner Family Tennis Center in Mason, Ohio, Aug. 19, 2018. (AFP Photo)
by Associated Press Aug 20, 2018 12:00 am

Novak Djokovic gave his racket to a fan and tossed his sweatbands into the stands. No need for mementos from this victory. The long-awaited Rookwood pottery trophy would be plenty.

He got the better of a nostalgic rematch — they hadn't played in two years because of injuries — and broke through in a tournament that Federer has won seven times, never losing a title match.

"Thank you for letting me win once in Cincinnati," he told Federer as they stood on court for the trophy presentation.

After reaching the final five times and losing every time — three to Federer — Djokovic jumped and punched the air in celebration of his breakthrough. He's the first to claim all nine ATP Masters 1000 events since the series started in 1990, something that had become his quest after so many close calls.

"That's what the headline should be about — this is such an amazing accomplishment," Federer said. "He's the first to do it. I think it's very difficult to win Masters 1000s. These performances don't come easy."

Djokovic leads their all-time series 24-22, doing better in the biggest matches. He's 3-1 against Federer in Grand Slam finals and 12-6 overall in championship matches, including wins at Wimbledon and the U.S. Open in 2015.

Djokovic completed a long comeback from elbow problems by winning his fourth Wimbledon title last month, then set out to get his hard-court game in order for the U.S. Open. He got better as the rainy week went on in Cincinnati, playing his best at the end.

"This seems to be a bit unreal, to be honest, to be back at this level," he said.

Federer's serve had been untouchable all week — held for 46 consecutive games. Djokovic broke that streak to go up 4-3 in the opening set, prompting Federer to mutter angrily. Djokovic served out the set, and then traded breaks with Federer early in the second set.

Federer's game was off — 28 unforced errors — and Djokovic took full advantage. He broke him again to go up 4-3 and served it out.

In the women's bracket, top-ranked Simona Halep let a match point slip away during the second-set tiebreaker, and Kiki Bertens rallied for a 2-6, 7-6 (6), 6-2 victory in her first hard-court final.

Bertens served a 109 mph ace , flipped her racket away, fell to her knees and raised both arms. Moments later, she covered her face for a joyous cry, wiping the tears away with her sweat-soaked blue wristband.

One point away from another loss, she had pulled off her biggest win, one that left her as stunned as everyone else.

"I cannot find words for this moment," she said.

The Dutch clay-court specialist ended Halep's streak of nine straight wins, including the title at Montreal a week earlier. She'd never beaten a top-ranked player, but wore down Halep at the end of her two draining weeks.

During the week in Cincinnati, Halep had one match suspended overnight by rain and wound up playing twice in one day to reach the semifinals. She controlled the first set on Sunday and had a chance to close it out, leading 6-5 in the tiebreaker.

When that slipped away, she never recovered, playing her worst in the final set — 13 unforced errors that gave Bertens a chance to pull away.

"I had a match (point), so I was there," Halep said. "I didn't take my chance. In the third set , I was empty and I couldn't fight anymore."

Halep will be ranked No. 1 through the U.S. Open. She fell to 0-3 in Cincinnati finals, finishing as the runner-up in 2015 and each of the last two years.

"I need a little bit of rest because I'm exhausted," Halep said. "But I also take the positive from these two weeks. It's a great confidence (boost)."

Bertens has worked on her hard-court game and her confidence on the surface. In three previous appearances in Cincinnati, she won a total of one match. She became the first unseeded player to win in Cincinnati since Vera Zvonareva in 2006.