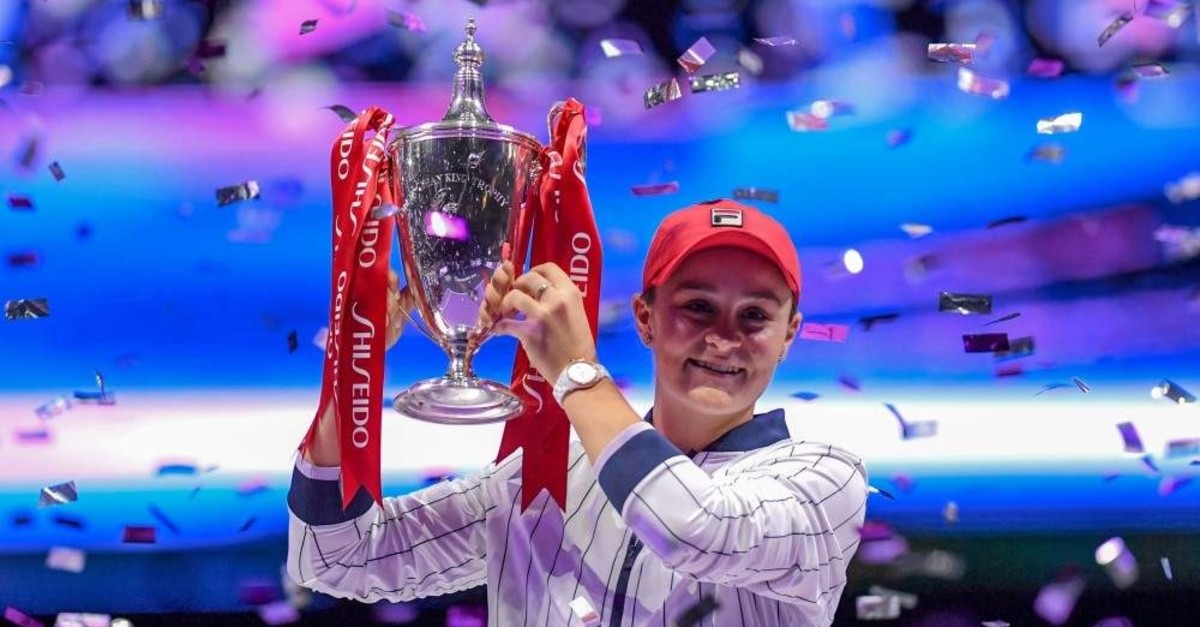 Ash Barty raises her trophy after winning in the WTA Finals tennis tournament, Shenzhen, Nov. 3, 2019. (AFP Photo)
by Nov 07, 2019 4:02 pm
World number one Ash Barty will look to crown her annus mirabilis by helping Australia to their first Fed Cup title in 45 years when she leads the host nation in the final against France in Perth this weekend. Barty's 2018 has been a season of individual triumphs, highlighted by her maiden Grand Slam title at the French Open and her WTA Finals win in Shenzhen on Sunday. Yet she has also proved to be a superb team player throughout the Fed Cup campaign and enters the decider unbeaten in nine singles rubbers dating back to 2017. Barty was the difference when Australia downed Belarus 3-2 in the semifinals in Brisbane in April, winning all three of her rubbers. That made her the first woman of any nation to win three rubbers in both the opening round and semifinals of the tournament since the best-of-five format started in 1995. If carrying the nation has proved a heavy burden, the 23-year-old has hidden it well and enthuses about the thrill of donning the 'green and gold'. "When you are playing for your country and you are playing in a Fed Cup final, it is pretty easy to get up and about and be as ready as you can," said Barty, who will anchor a team that also features Australia No. 2 Ajla Tomljanovic and veteran Sam Stosur. "It’s a format that I love, I cherish it. This is going to be a really precious week."
With seven titles, Australia is the third most successful nation in the event after the United States with 18 and the Czech Republic with 11, who won five before the 1993 split with Slovakia and six after. But the Australians have barely registered in the last three decades, barring a solitary trip to the final in 1993. They last claimed the title in 1974 during a golden era for Australian tennis when former world number one Evonne Goolagong was in her pomp. Four decades on, local fans see encouraging similarities between the teams. Aboriginal Australian Goolagong led the nation to the 1974 title with victory in the final against the United States after winning a Grand Slam title at the Australian Open and the WTA Finals crown.
Barty is Australia's first women's world number one since her mentor Goolagong and also the first indigenous Australian to win a Grand Slam title after the 68-year-old great. Twice champion France has proven more successful than Australia in the modern era, claiming the 1997 and 2003 titles, while being beaten for the 2016 trophy by the Czech Republic. They boast depth and versatility in Caroline Garcia and Alize Cornet, and a formidable all-round player in the nation's top-ranked Kristina Mladenovic, who won the doubles title at the WTA Finals and beat Barty in singles in Rome early in the year. The Julien Benneteau-captained team are no strangers to Perth Arena either, with Cornet having won the team-based Hopman Cup event at the venue in 2014 and Mladenovic winning it in 2017. "When you play a Fed Cup final with the number one in the world on the other side, and away, you cannot say you have an advantage,” Benneteau said. "But for sure, I have a lot of options for singles and doubles."