Djokovic begins challenge for year-end No. 1 at ATP Finals 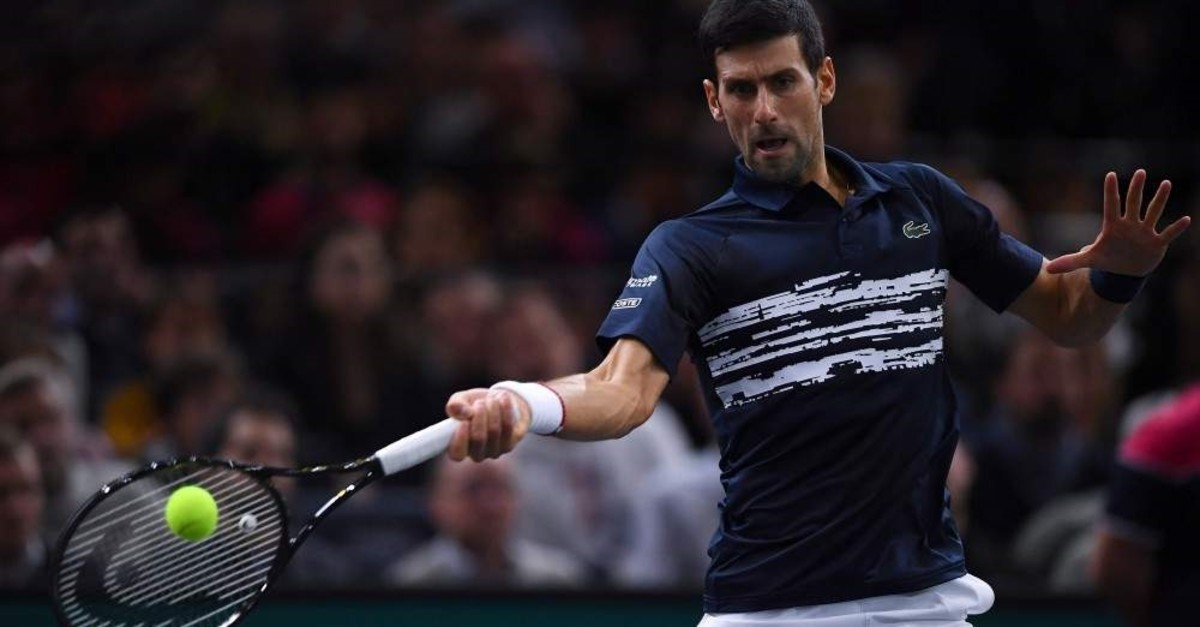 Novak Djokovic has one more title to track down as he attempts to steal the year-end world No. 1 ranking from Rafael Nadal at the ATP Finals on Sunday

Novak Djokovic will be on a mission to reclaim the world No. 1 spot as the season comes to a close at the ATP Finals in London's O2 Arena, starting Sunday.

Despite winning his fifth Paris Masters title last week, the 32-year-old Serbian lost the top ranking to Rafael Nadal because 1,600 of his ranking points had expired from last year's events in the French and English capitals.

Nadal had to pull out of the Paris semifinals with an abdominal injury he sustained while warming up for his match with Canada's Denis Shapovalov. The Spaniard has been training at the Queen's Club in London and his coach Carlos Moya says "he should be fine" for his opening test with defending champion Alexander Zverev Monday.

Djokovic was beaten 6-4, 6-3 by Zverev in last year's final, but if he wins this year's title, he will be guaranteed to finish the season as No. 1 for a record-equaling sixth time. He would share the record with American Pete Sampras.

"If I manage to get the year-end No. 1, that would be, of course, fantastic," Djokovic said. "I have to keep on winning. There's always a chance that I win all my matches in London, that I play well. But it's (an) extremely difficult task considering who my opponents are going to be. You're playing a top 10 player every single match."

The ATP Finals features the top-eight ranked players that play three round-robin matches each in two groups of four. The top two in each group advance to the semifinals. Nadal leads the Andre Agassi group with Russian U.S. Open finalist Daniil Medvedev, who he beat for his 19th grand slam title. Greece's Stefanos Tsitsipas and German Zverev complete that group. Djokovic was drawn in the same Bjorn Borg group as Roger Federer, who he has not played since their epic five-set encounter in the Wimbledon final last July.

If Djokovic wins the tournament, he will also equal another record with Federer's haul of six ATP Finals crowns. Austria's Dominic Thiem returns to the Finals for the fourth year in a row while Italy's Matteo Berrettini makes up the eight in his debut appearance. Zverev's victory over Djokovic last year hinted at a changing of the guard, suggesting the "big three" of Djokovic, Federer and Nadal would no longer enjoy complete dominance over the tour. But once more it is that trio who split the grand slams with Nadal defending Roland Garros and Djokovic also claiming Australia.

Tsitsipas, who was previously the Next Gen Finals champion for under-21 players, at least beat all three players in 2019. He started with a career landmark victory against Federer at the Australian Open, before taking down Nadal in Madrid and upsetting Djokovic in Shanghai.

The world No. 7, the Greek athlete says he looks forward to being among the best in London, and he is not intimidated by the men he once thought of as idols.

"I always dreamt of beating those players," Tsitsipas said. "I honestly feel like they are more threatened than I am. I mean, it can't be that Rafa, Roger and Novak win everything." He said, adding: "I know that in order to see my name among these titles, I'm going to have to go through a lot of pain and a lot of hype and struggle. I'm excited by the idea of trying to get there."