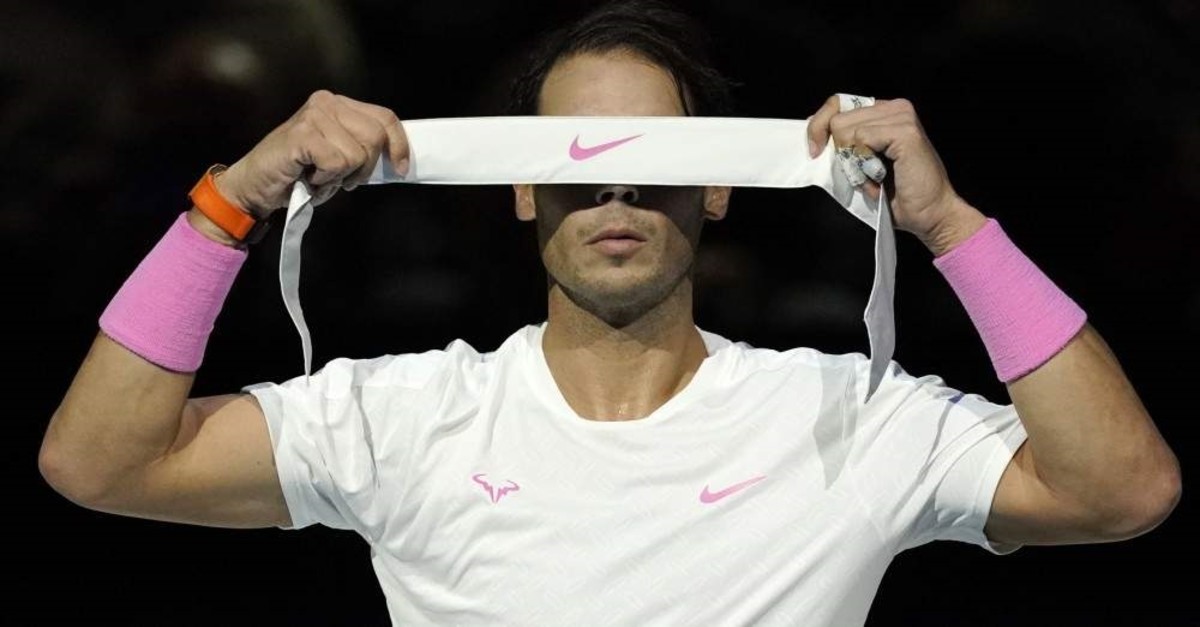 After being thoroughly outplayed by defending champion Alexander Zverev at the ATP Finals, Rafael Nadal refused to make any excuses.

The top-ranked Spaniard wouldn't blame the abdominal problem that forced him to pull out of the Paris Masters semifinals just nine days earlier, or a hand injury that kept him sidelined before that. And he bristled at the notion that his recent marriage could be a factor in a sub-par performance.

Something was clearly off for Nadal, though, who lost 6-2, 6-4 to a player he had a perfect 5-0 record against before Monday's match at the O2 Arena.

Nadal dropped his serve three straight times, didn't force a single break point, and his normally powerful forehand was responsible for more than four times as many unforced errors (13) as winners (3).

Still, Nadal insisted there was nothing wrong with him physically.

"I did not feel pain in the abdominal at all," he said. "So the physical issue was not an excuse at all. The only excuse is I was not good enough tonight."

Nadal hasn't finished a tournament since winning the U.S. Open in August, also pulling out of Shanghai because of a hand injury. That lack of playing time certainly isn't helpful coming into an event featuring only the top eight players in the world, rather than lower-ranked early opponents.

He still has to face Stefanos Tsitsipas and Daniil Medvedev in round-robin play, and probably has to beat both in order to reach the semifinals.

"Knowing that I would not be at my 100% in terms of feelings, in terms of movement, in terms of confidence or hitting the ball, I needed my best competitive spirit this afternoon, and I was not there in that way," Nadal said. "I need to play much better in two days."

The Spaniard then got a bit testy when a journalist asked whether his October marriage to longtime girlfriend Maria Francisca Perello has changed his outlook on the game at all.

"Honestly, are you asking me this? Is that a serious question or a joke?" Nadal bristled. "It is a big surprise for me (that) you ask me this after I have been with the same girl for 15 years and having a very stable and normal life. Doesn't matter if you put a ring on your finger or not."

For Zverev, this latest win means he has beaten each of tennis' Big Three in his last three matches at the O2.

The German defeated six-time champion Roger Federer in last year's semifinals and then five-time winner Novak Djokovic in the final.

"It's definitely a place and a court that I love, and that brings maybe the best out of me," the seventh-seeded German said.

Nadal has a history of being far from his best at the ATP Finals, which comes at the end of a gruelling season that often takes its toll on the Spaniard because of his ultra-physical playing style. He has qualified for the event for 15 years in a row but has pulled out of it on six occasions because of injuries. He has never won the title, reaching the final twice.

But he showed up to London hoping to stave off Djokovic for the year-end No. 1 ranking.

Djokovic won his opening match on Sunday and this loss cuts Nadal's lead over the Serb to just 440 points in the rankings table – each round-robin win is worth 200 points – with a total of 1,300 more points up for grabs for each player.

Earlier, Tsitsipas earned his first career win over Medvedev – a victory that clearly meant a lot to the Greek not only because Tsitsipas was 0-5 against the Russian before winning 7-6 (5), 6-4, or that it came in his ATP Finals debut.

But mainly because two of the biggest rising stars in tennis simply don't like each other that much.

"It's a victory that I craved for a long time now, and it's great that it came at this moment," Tsitsipas said. "Our chemistry definitely isn't the best that you can find on the tour. It's not that I hate him (but) we will not go to dinner together."

The grudge dates to their first meeting, in Miami last year, when Medvedev berated Tsitsipas for not apologizing after hitting a net cord during a point, a spat that ended with both players trading insults on court.

"After that, I think I didn't win a single game. He did get into my head, and I was very frustrated that it did go this way," Tsitsipas said. "'He started telling me that I should apologize, that what I do is unsportsmanlike. I did get (angry) and said what I said, which I do regret, but at the time I was very frustrated."

On Monday, the sixth-seeded Greek earned the only break of the match to lead 5-4 in the second set and clinched the win with a forehand overhead at the net.

"He was better today, but I felt like I was missing some things," said Medvedev, the U.S. Open runner-up. "This frustrates me after. I do think it would frustrate me against any other opponent. I hate to lose against anybody."