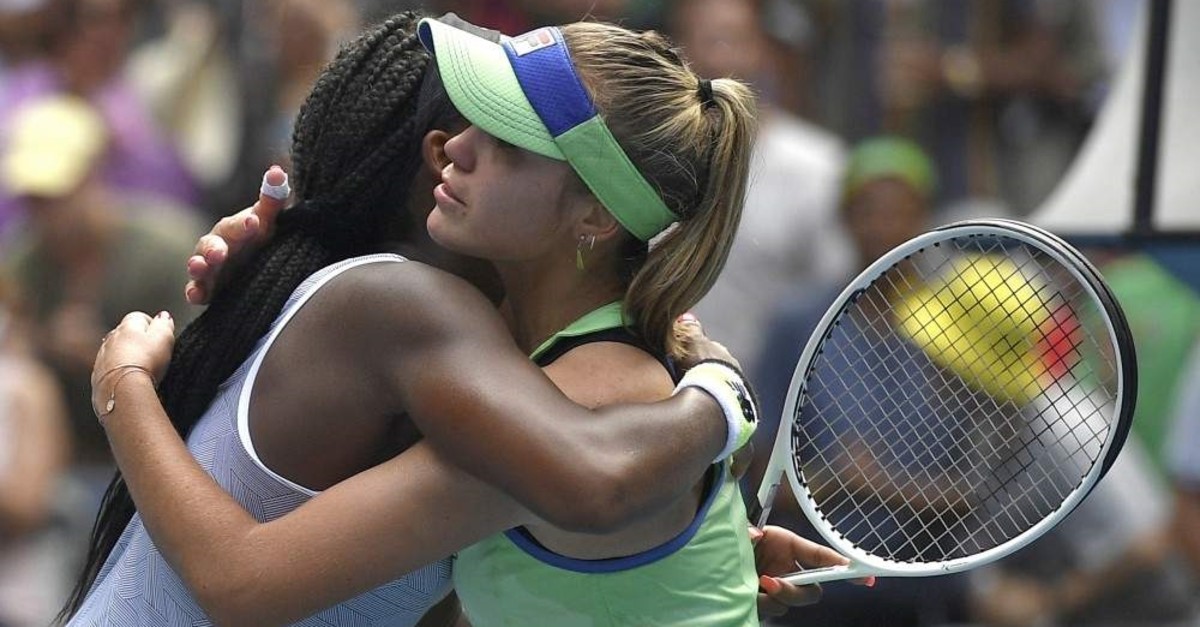 Coco Gauff's latest history-making Grand Slam run at age 15 ended with a 6-7 (5), 6-3, 6-0 loss in the Australian Open's fourth round to Sofia Kenin on Sunday

Coco Gauff's unprecedented run in the Australian Open comes to an end on Sunday, courtesy of another American player. The 15-year-old Gauff lost to 21-year-old Sofia Kenin who reached her first major quarterfinal with the victory. "I just needed to calm down, relax, try my best and fight," the 14th-seeded Kenin said. "I'm just so speechless."

In her previous match, the 67th-ranked Gauff beat Naomi Osaka to become the youngest player in the professional era to defeat the reigning women's champion at the Australian Open. But Gauff did not play as well this time, winding up with 48 unforced errors, more than twice as many as Kenin's 22.

After dropping the opening set, Kenin immediately tilted things her way, breaking in the initial game of the second and never letting that lead slip away. When it ended, appropriately enough, on a missed backhand by her opponent, Kenin dropped her racket at the baseline and covered her face as tears welled in her eyes. "She's such a tough player. Had a tremendous 2019," Kenin said, referring to Gauff with words that also apply to Sunday's winner. "All respect to her."

Just before Gauff announced herself last season by becoming the youngest qualifier in Wimbledon history and beating Venus Williams en route to the fourth round, Kenin strode onto the Grand Slam stage at the French Open by upsetting Serena Williams to get to the round of 16 at a major for the first time. Gauff's power is impressive. One tiny indication: She slammed a forehand into the net so hard that it dislodged a piece of a sponsor's white plastic sign. Kenin can't copy that. But thanks to her relentless ball-tracking and a bit of in-your-face attitude with a racket in hand, Kenin surged up the WTA rankings from 52nd to 12th in 2019 while winning her first three tour-level singles titles plus a couple in doubles.

Also on Sunday, defending champion Novak Djokovic moved into a quarterfinal against No. 32 Milos Raonic. Djokovic defeated No. 14 Diego Schwarzman 6-3, 6-4, 6-4. Raonic beat 2014 U.S. Open champion and 2018 Australian Open runner-up Marin Cilic 6-4, 6-3, 7-5 with the help of 35 aces. Perhaps just as noteworthy: The Canadian produced 30 more aces than Cilic, a big server himself. Raonic has 59 holds in a row and won all 12 sets he has played so far en route to his third quarterfinal in Melbourne. He was the runner-up at Wimbledon in 2016, but hasn't been to a Grand Slam semifinal since while dealing with a series of injuries in recent seasons. "I haven't gotten to do this much over the last two years," Raonic said, "so it means a lot to me."

He has been overshadowed of late by other, younger Canadians: Bianca Andreescu, who won the U.S. Open last year at 19 but missed the Australian Open with a knee injury; and Denis Shapovalov, 20, and Felix Auger-Alissime, 19, who both were seeded among the top 20 men at Melbourne Park but lost in the first round.

At Melbourne Arena, Gauff won the toss, elected to serve and proceeded to hand over a quick break, accumulating four misses, including a backhand that hit the net tape and popped back onto her side. Kenin shouted "Come on!" while the ball was still in the air. She soon took leads of 2-0 and 4-2, as a tentative Gauff was trying to feel her way into the match. But then Kenin faltered, a bit of inexperience revealing itself when she opted not to challenge a forehand of hers that was called out – and a TV replay showed was in. That mistake granted Gauff her initial break chance of the afternoon, which Kenin then donated by sailing a forehand long. Suddenly it was 4-all, and they headed to a tiebreaker, where Kenin blinked first. She had avoided even one double-fault until then, but offered up two as Gauff went ahead 5-2, used a 191 kph serve to set up a forehand winner for 6-2 and, after letting set points slip away, closed it when Kenin netted a backhand. Gauff repaid the favor in the second set, offering a trio of double-faults in one game – she finished with seven - to get broken and trail 3-1. They would play for more than two hours in total, and Gauff never got back in it.
RELATED TOPICS