Kenin, Muguruza to face off in Australian Open final 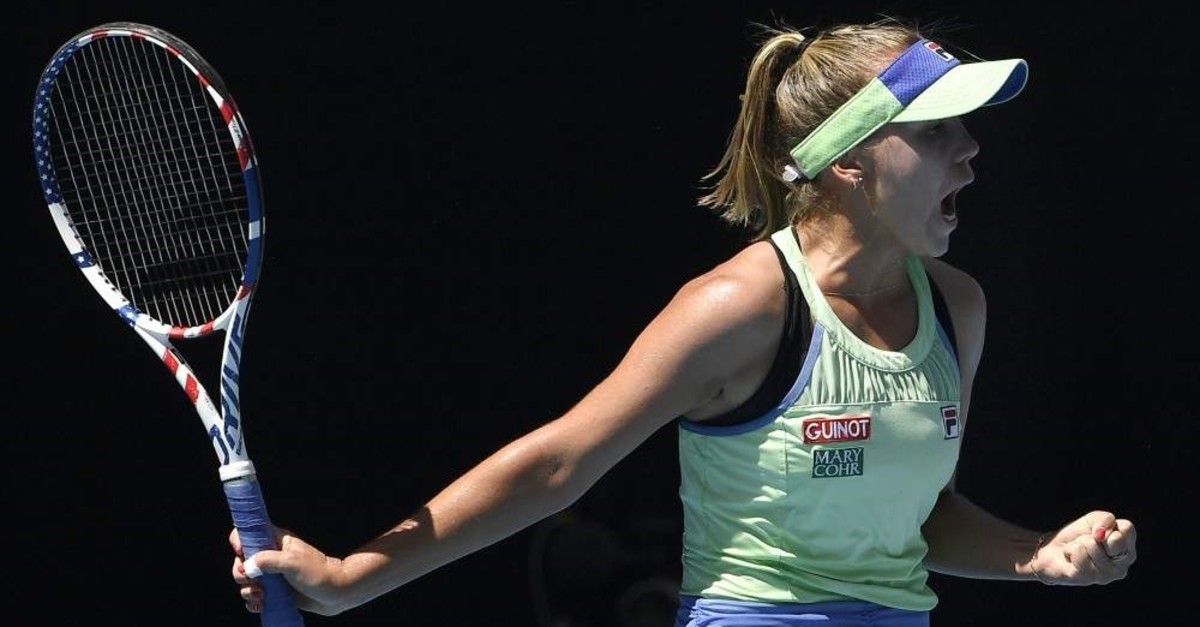 Sofia Kenin of the U.S. reacts after winning the first set against Australia's Ashleigh Barty during their semifinal match at the Australian Open tennis championship in Melbourne, Australia, Thursday, Jan. 30, 2020. (AP Photo)
by Compiled from Wire Services Jan 30, 2020 9:33 am

Unheralded Sofia Kenin of the U.S. sent world No. 1 Ash Barty spinning out of the Melbourne Park semifinals 7-6(6) 7-5 on Thursday to reach her maiden Grand Slam final, crushing Australian hopes of a first homegrown champion in 42 years.

Moscow-born Kenin, 21, looked stunned at reaching her first Grand Slam final, at a tournament where she has often gone unnoticed while fellow Americans Serena Williams and 15-year-old Coco Gauff hogged the headlines.

"I'm just speechless, I honestly can't believe this. I've dreamed about this moment since I was 5 years old ... I've worked so hard to get here," said Kenin, who was a baby when her family moved to America with just a few hundred dollars to their name.

"She came up with some really great shots. I knew she wasn't going to give it up to me – I really had to fight out here. There's a reason she's No. 1."

It took Kenin 43 minutes to register just one forehand winner, while 11 of her initial 14 points resulted from unforced errors by Barty.

Barty had nearly twice as many winners in the first set, 22-12, thanks in large part to her eight aces, and she gathered more total points, too: 46-44. But that doesn't matter at all in tennis, of course.

Barty was a point from taking that set when she went up 6-4 in the tiebreaker by slapping a 126-kph second serve with a forehand return winner, prompting Kenin to bounce her racket off the blue court and shake her head.

Maybe that helped her release some tension, because she wouldn't lose another point in the set.

Barty's first set point was wasted with a netted backhand. The second was erased when Kenin ripped a good return, followed by a forehand that wrong-footed Barty. Another winner by Kenin, this one a swinging forehand volley, put her ahead 7-6 for her first set point. Barty then missed a runaround forehand, ending the set. Kenin shouted, "Come on!"

Not ready to concede, Barty recovered quickly, earning the match's first break, 70 minutes in, en route to a 3-1 lead in the second set. That grew to 5-3, and she served for it at 5-4, but stumbled once more.

On Saturday, Kenin will go up against unseeded Garbine Muguruza, who overcame fellow two-time major champions and former No. 1 Simona Halep in Thursday's second semifinal.

Muguruza got the first break on 3-3 thanks to her 12th winner, but the Romanian fourth seed broke back when it mattered most as Muguruza served for the opener, bringing things back to 5-5, with a tiebreak eventually needed to break the impasse.

Both players got chances to take the lead, but eventually it was the Spanish 26-year-old who came out on top after 67 minutes of play. Three consecutive breaks led to Helep serving to stay in the match on 5-4, but Muguruza kept her under pressure, converting her fourth break point in the game to tie things up.

After a convincing hold, Muguruza got Halep on the ropes after earning two match points. The Romanian defused the first one with a winning backhand, but she closed the following rally with a ball in the net as she missed a second Melbourne final