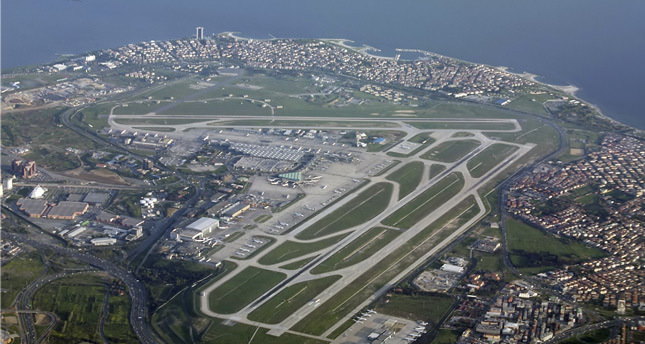 by AA May 03, 2014 12:00 am
ANKARA — Istanbul Ataturk Airport broke air traffic record of all time in Europe with 1,267 landings and takeoffs on Thursday, May 1st, Turkey's airports management agency said.

The agency said Ataturk Airport, which led with the highest numbers of passengers in Europe in August of last year, now breaks a new record in air traffic.

While a new record was broken on April 25 this year with 1,246 planes landing and taking off in 24 hours, the May 1st surpassed this record with a total of 1,267 airplanes, 632 landing and 635 taking off from Ataturk Airport.

Turkey's Transport Ministry said in January that Turkish civil aviation broke a record with over 150 million passengers in 2013, an increase of 14.6 percent compared with 2012.

There was 17.6 percent increase in domestic flights in 2013 and the number of passengers reached 76.1 million. International passengers numbers reached 73.3 million with a rise of 11.8 percent.

In the last 10 years, Turkey has experienced more than a 20 percent annual increase in both aircraft and passenger traffic and in 2012, the commercial aircraft traffic of Ataturk Airport increased 14.8 percent compared to 2011.

According to 2010 forecasts by Turkey's Middle East Technical University's, in 20 years Istanbul airports' commercial aircraft traffic will exceed 1 million aircraft and will host 118 million passengers per year. Cargo traffic will reach 2.5 million if the infrastructure is available.