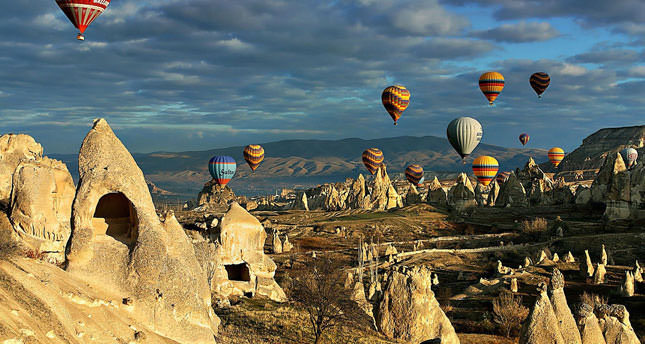 by Daily Sabah Oct 04, 2014 12:00 am
Turkey has now become one of the leading countries in the global tourism sector as a result of the investments it started in 1982 and increased in the 2000s. According to data compiled by the Anadolu Agency (AA), while Turkey was in 20th place on the list of most visited countries in 2000, now it has leaped to sixth place, leaving 14 countries behind. While the number of tourists visiting Turkey was around 4.4 million in the 1990s, when tourism was becoming an industry, the figure increased to around 10 million in the 2000s. In 2010, Turkey obtained an important place in the world market with more than 30 million tourists visiting the country each year.

Now Turkey is one of the most preferred tourism destinations globally with its sea, sand, sun and historical and natural wonders. With important investments and by utilizing alternative tourism resources located in the country, it is expected that Turkey will reach fifth place on the most visited countries list.

One of the targets for celebrating the 100th anniversary of the foundation of the Turkish Republic in 2023 is the aim to welcome 50 million tourists and increase tourism revenues to $50 billion. Since Turkey is located in between Europe, Asia and Africa, it is easily accessible from these three continents with flight distances ranging around five hours.

By turning this advantage into an opportunity and with the third airport and other similar investments, Turkey will stay ahead of the game. According to data from the Ministry of Culture and Tourism, there was a 7 percent increase in the number of tourists in the last eight months when compared to last year. While mostly Russians preferred Turkey as their holiday destination, Antalya became the region most popular among foreign tourists.

Antalya, which accounts for 75 percent of the whole tourism sector, and Istanbul and Muğla have witnessed an 8 percent increase when compared to last year. The number of Russians visiting Turkey increased by 13 percent, reaching about 3.5 million, and was followed by 3.3 million German tourists. The number of British tourists also increased by 4.4 percent, reaching 1.8 million.