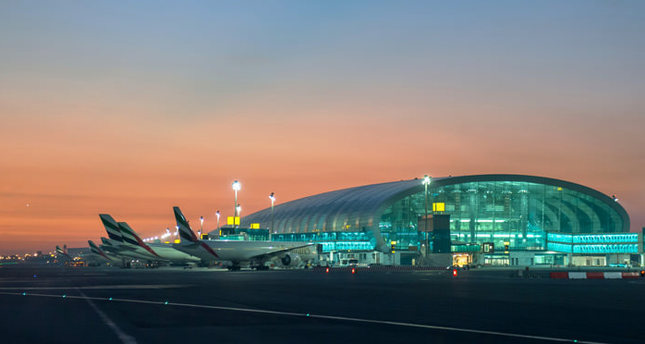 Dubai International Airport was the world's busiest for international passenger traffic last year, it said yesterday, taking that title for the first time from London's Heathrow Airport, which has been running into capacity constraints.

The Dubai airport's operator said 70.5 million passengers passed through it last year, up 6.1 percent from 2013, as the emirate's trade and tourism industries boomed.

Political unrest in the region has pushed more investors and tourists to Dubai, which is seen as a safe haven, while state-owned Emirates airline and budget carrier flydubai are expanding rapidly, steering traffic to the emirate. Heathrow hosted 68.1 million international passengers in 2014, up 1.2 percent, a Heathrow spokeswoman said. British politicians and authorities have been wrangling for years over how to increase airport capacity near London but have not reached a decision. A commission is due to make final proposals by this summer, choosing between three options: a third runway at Heathrow, an extension to an existing Heathrow runway, or a second runway at Gatwick Airport.

"Britain has benefited from being home to the world's largest port or airport for the last 350 years. But lack of capacity at Heathrow means we have inevitably lost our crown to Dubai," the Heathrow spokeswoman said.

Dubai Airports, which operates Dubai International, forecast this year's traffic would jump to 79 million passengers, helped by the planned opening of the new Concourse D, which would boost annual capacity to 90 million. In December alone, the airport's traffic rose 7.5 percent from a year earlier to 6.50 million passengers. Cargo handled by Dubai International totalled 2.37 million tons last year, down 3.4 percent because of the shift of freighter traffic to Dubai World Central, the emirate's other main airport. December's freight volume decreased 7.0 percent to 202,836 tons.

Separately, airlines from at least three countries suspended flights to Baghdad yesterday after bullets hit an airplane operated by budget carrier Dubai Aviation Corp, known as flydubai, as it was landing at Baghdad airport. An aviation official and a security official told Reuters two passengers were lightly injured when three or four bullets hit the body of the plane on Monday evening. The security official said the authorities had rounded up suspects in farmlands south of the airport, which sits on the city's western outskirts. It was not clear whether the shooting was intentional. Guns are widely available in Iraq and celebratory gunfire into the air is not uncommon. The aviation official said Iraq had briefly suspended air traffic on Monday following the incident but permitted it to resume on Tuesday morning. However, flydubai, Emirates Airlines, Sharjah's Air Arabia and Abu Dhabi's Etihad Airways suspended flights on Tuesday, in line with a directive from the United Arab Emirates' civil aviation authority. Turkish Airlines and Lebanon's Middle East Airlines (MEA) also suspended flights for the day without citing the shooting incident.

A spokesperson for flydubai denied that any passengers had required medical treatment and said an investigation was under way.