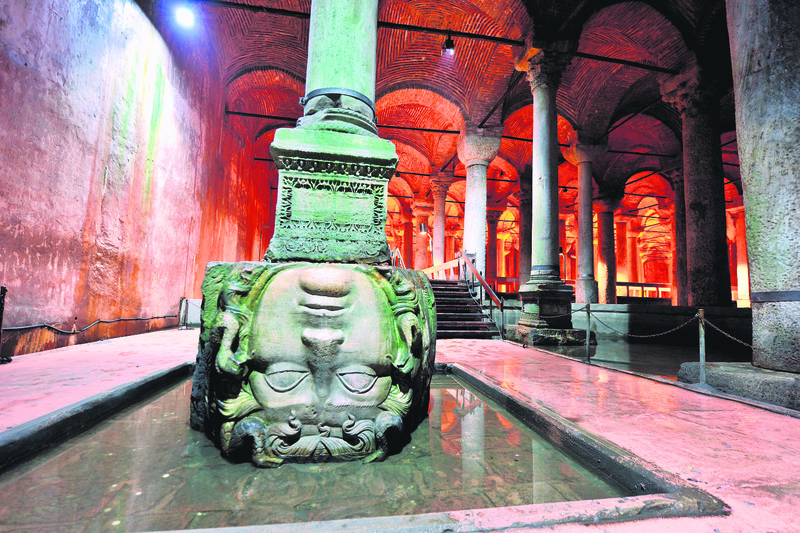 by Zeynep Esra İstanbullu
Mar 06, 2015 12:00 am
The Basilica Cistern, situated in Istanbul's Sultanahmet Square, was named Turkey's second-best attraction by TripAdvisor, the world's biggest travel and tourism website. Voted for by millions of users, the Travelers' Choice 2014 list announced the top 10 tourist attractions in Turkey, ranking the ancient city of Ephesus in İzmir's Selçuk district as number one. The list introduces other renowned places including Topkapı Palace, the Hagia Sophia, Sultanahmet Mosque (Blue Mosque), the Ani Ruins in eastern city of Kars and Selimiye Mosque in Edirne. Built by the Byzantines to provide drinking water, the Basilica Cistern attracts hundreds of tourists and foreign filmmakers with its upside-down heads of Medusa, mystical atmosphere and magnificent columns. The historical venue was featured in the latest James Bond movie "Skyfall" and Russell Crowe's "the Water Diviner." Some scenes of the upcoming film adapted from Dan Brown's "Inferno" will also take place in the Basilica Cistern. Tourists touring around the city of Istanbul, the home of three empires, do not return without paying a visit to the Basilica Cistern. The site opened its doors in 1987 after the Istanbul Metropolitan Municipality undertook comprehensive repairs. In 2014, the venue welcomed 2.1 million tourists, a record. So far this year, the cistern has attracted 234,586 visitors. TripAdvisor began announcing the Travellers' Choice list in 2002 based on the opinions of its users. High-quality service and customer satisfaction are the main assessment measurements for inclusion.
Last Update: Mar 06, 2015 2:27 am