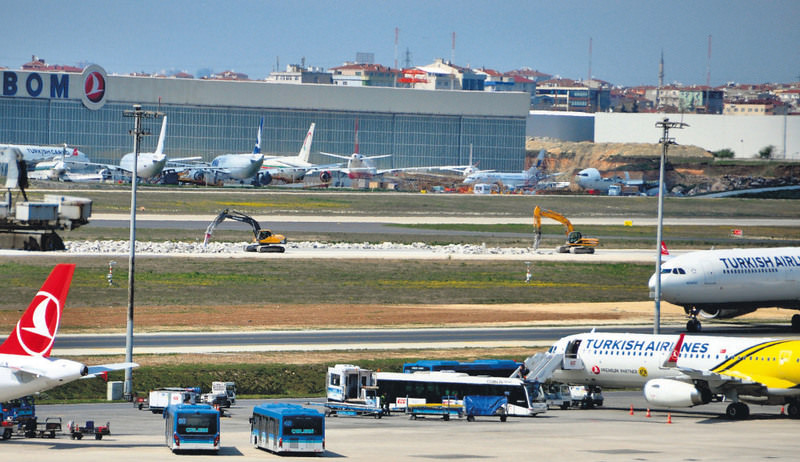 Istanbul's International Atatu00fcrk Airport (above) and Sabiha Gu00f6ku00e7en airports, remain inadequate to satisfy the growth of the local aviation sector, said the head of the consortium building the third airport.
by Dilek Güngör May 04, 2015 12:00 am

The CEO of CMLKK, the consortium building Istanbul's third airport, said construction officially began on May 1 and added that the project was of national importance for Turkey's future economic growth

The head of the consortium that won the tender to build Istanbul's third airport, projected to be the world's biggest when complete, said that construction officially began on May 1.

The chief operating officer of the consortium, formed by the partnership between Cengiz, Mapa, Limak, Kolin and Kalyon holdings (CMLKK), Yusuf Akçaoğlu said the process was progressing "exceedingly fast," as planned. "The master plan will be approved soon. The design auctions for the 90-million capacity terminal, the world's largest, is close to completion. It includes PAT areas, three runways, towers and support buildings. The surveying and land reclamation will come to a stage in the next few months and we'll proceed with completing the necessary tenders and begin production."

Akçaoğlu said their efforts to reclaim the swamp area along with the necessary digs were proceeding on schedule, adding that currently approximately 5,000 people worked in the area. "We have also collected the necessary equipment to build the airport. Most of the work is done by Turkish architects and engineers. Through this project, we will show the entire world what Turkish human resources are capable of," he said.

The General Directorate of State Airports Authority (DHLİ) had officially handed over the allocated area, said Akçaoğlu, who described it as a crucial step in the airport's construction process. "I believe all the debates will end with this handing over. One needs to see certain facts. In every such mega project, there will be those opposing it. However, the third airport project is crucial not only for Istanbul but for the entire country. This project is the embodiment of what the Turkish aviation industry aspires to. Together with the significant development in the industry, there is significant growth in the number of passengers in domestic flights. Every single Anatolian city is linked to Istanbul, which is the source of capital for the entire country. The number of flights from Anatolia is increasing every year."

He said the route between the political capital Ankara with the commercial and cultural capital Istanbul was one of the busiest in Europe and the frequency of flights was growing constantly. "The national carrier Turkish Airlines (THY) is growing by leaps and bounds. The aviation sector consists of three legs, passengers, aviation firms and airport infrastructure. In regards with the first two, we have no problems. However, the third leg is weak because Istanbul doesn't have the necessary infrastructure to transform Istanbul into a hub," he argued. Istanbul's existing two airports, Istanbul Atatürk and Sabiha Gökçen, are working at close to full capacity, he said, adding that both were seriously lacking in terms of hosting transit passengers.

As of 2014, the number of people working in the aviation and relevant industries is 1.15 million, 4.5 percent of the entire workforce. The aviation industry also forms 5.6 percent of the Gross Domestic Product. Both these figures are well above global averages, said Akçaoğlu, which he believes makes the building of the third airport key to future growth.

Akçaoğlu described the third airport as a "national project" that would facilitate huge growth in the Turkish aviation industry and argued, "If we fail to realize the third airport, it faces the threat of contraction."

He said the failure to build the third airport would result in the industry contracting, followed by smaller private aviation firms merging or even disappearing. "This would naturally weigh down our entire economy," he said.
Last Update: May 05, 2015 10:49 am
RELATED TOPICS