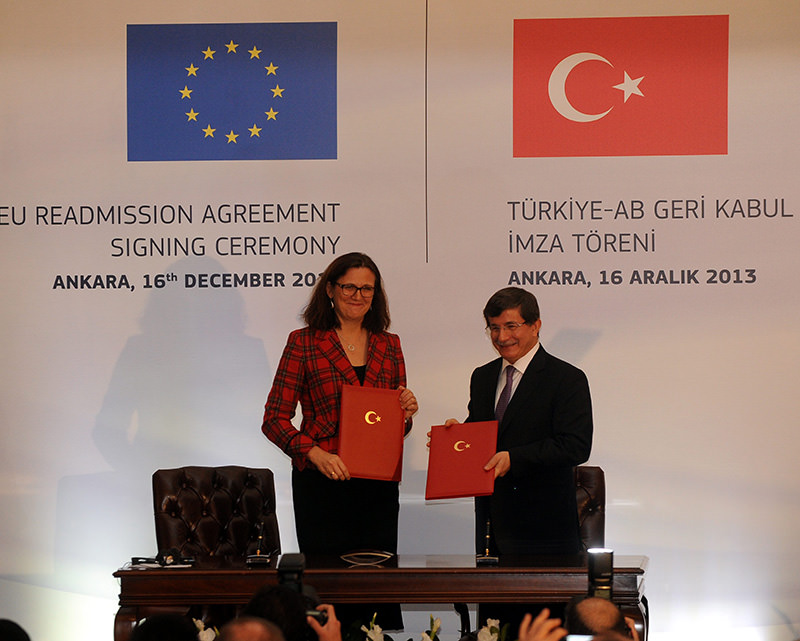 European home affairs Commissioner, Cecilia Malmstrom, Turkeyu2019s then Foreign Minister Ahmet Davutou011flu signing readmission agreement for Turkish citizens in Belgium, Dec. 04, 2013
by Daily Sabah Jun 25, 2015 12:00 am
Turkey has been working to becoming a member of the EU for over 50 years, but Turkish citizens have collectively paid a total cost of 48.8 million euros in one year just on visas to travel to European countries.

Parliament authorized the Readmission Agreement last year, a treaty that was signed between Turkey and the EU. This was a significant step toward Turkish citizens being able to travel to European countries without a visa. The current procedure requires short-term Schengen visas for Turkish citizens who do not have special types of passports. Schengen visas are issued by EU member countries, and applicants are charged a fee, like with any visa. Last year, Schengen visa applications cost a total of at least 48.8 million euros for Turkish citizens, according to the Economic Development Foundation (İKV), which is a great burden on Turkish citizens caused by the EU's visa requirements for Turkey.