20 percent discount to local tourists thanks to Russian effect 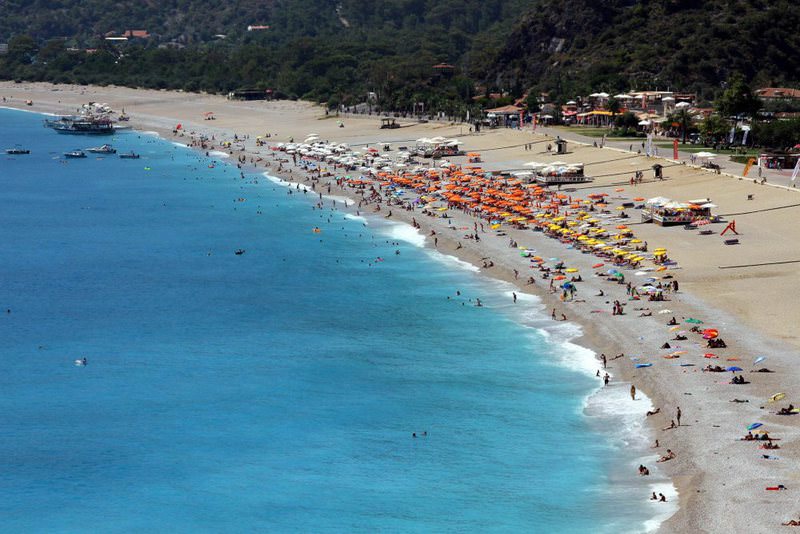 The decline in foreign tourist numbers was limited to just 1.2 percent, but the aim is closing the season with a total of 43 million foreign tourists.
by Daily Sabah with AA Jul 07, 2015 12:00 am

The economic crisis in Russia has not had devastating effect on Turkish tourism yet thanks to increasing numbers of visitors from other countries, however tourism agencies are applying 20 percent discount to attract local tourists

The tourism sector is expecting activity to greatly increase after Ramadan ends, and is focusing more on local tourists. The Turkish tourism sector has experienced difficult times due to the economic crisis in Russia, which has been to the benefit of local tourists and given them the opportunity to benefit from up to a 20 percent discount.

According to a report by the Association of Turkish Travel Agencies, the decline in the number of Russian tourists has not significantly affected Turkish tourism yet. The data regarding the first five months of the year suggested a 28.3 percent decline in Russian tourist numbers, but this was compensated by an influx of tourists from Germany and other countries.

General elections in June, high school and university entrance examinations and Ramadan coincided with the air temperature staying below seasonal norms for what has been a struggle for the tourism sector this summer. As the weather is getting warmer, local tourist numbers are expected to surge beginning with Ramadan eid after mid-July. Local tourists usually prefer Çeşme and Bodrum as vacation spots, but Antalya has received a lot more demand from Turks this summer thanks to the lower prices offered by tourism agencies due to the decline in Russian visitors. Çeşme and Bodrum are relatively expensive tourist destinations compared to Antalya.

Hotel occupancies reach peak levels during eid, and predictions suggest 35 percent of Antalya hotels will consist of local tourists this season. Local tourists will enjoy an average of 20 percent in discounted prices for their Antalya vacations, but the biggest discounts will be available in the Side district of Antalya, as the price drop exceeds 35 percent this summer.

Association of Turkish Travel Agencies President Başaran Ulusoy said it is possible to rent a room for prices starting from TL 300 ($111.64) during eid, which means it would take a budget of TL 900 to TL 1,000 for a four day and three night vacation. Ulusoy said foreign destinations require budgets starting from 190 euros to 4,900 euros per person, while the expenditure of local tourists is TL 1,000 on average.

In Antalya, hotel occupancy ratios declined compared to last May, dropping to 62.4 percent, while the average room price declined by 0.8 percent to become 76.18 euros per night. Meanwhile in Istanbul, hotel occupancy ratios increased 5.2 percent to reach 75.3 percent. However, the room prices in Istanbul dropped by 4.1 percent to become 143.2 euros per night. As the tourism season gets going, the ratio of early bookings for the Ramadan holiday and the period after has reached 80 percent. While 35 percent of local tourists pay cash for their vacations, about 65 percent of the holidaymakers prefer to pay for their vacations in monthly installments with their credit cards. According to Interbank Card Center (BKM) data, credit card usage for purchasing services from the hotel sector increased by 180 percent in the last five years. The credit card usage for hotel services amounted to TL 2.9 billion in 2010 and TL 8.3 billion in 2014. Within the same period, there has been a significant increase in bankcard usage as well. In 2010, transactions totaling TL 210.7 million were made via bank cards for hotel services, but these numbers exceeded TL 1 billion by 2014. Lastly, cash payment for hotel services in 2014 amounted to TL 4 billion, which adds up with the other payment methods to reach an approximate grand total of TL 13 billion for expenditure on travel accommodation for 2014.
Last Update: Jul 07, 2015 8:16 pm
RELATED TOPICS