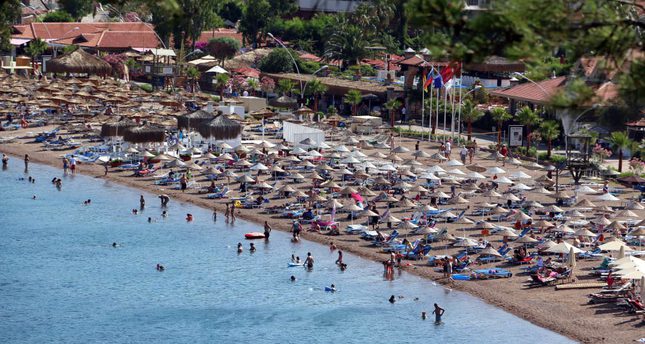 by Daily Sabah Aug 17, 2015 12:00 am
The $6,000 per plane fuel subsidy for tour operators will continue from Sept. 15 through Nov. 30, according to Culture and Tourism Minister Ömer Çelik. Stressing that the unrest on Turkey's borders has had a bad effect on the tourism sector, Çelik pointed to Russia's economic crisis, which has been ongoing since the second quarter of 2014. The Russian crisis has affected tourism sectors all over the world, as the Russian tourism outflow decreased 40 percent.

The government decided to support the tourism sector from the effects of the crisis in Russia, since Russian visitors make up a significant portion of all incoming tourists. The tourism stimulus package covers planes that carry tourists from Russia and the Commonwealth of Independent States and Iran to Turkey. The ministry's cooperation with tour operators and extensive promotion program limited the decline in incoming Russian tourists at around the 20 percent level, which was above 30 percent at the beginning of year. Spain, France and Italy, which are tourism rivals of Turkey, have seen the number of Russian tourists drop more than 40 percent and were outperformed by Turkey. The Tourism Ministry expects the Russian tourist loss to drop below 20 percent, as they aim to end the year at a 10 percent to 20 percent loss of Russian tourists. Çelik said that the fuel subsidy limited the effects of the Russian crisis, and 2,500 nonscheduled flights were given $6,000 via the subsidy. Underlining that the tourism sector reaped the rewards of the ministry's work, Çelik said that they decided to implement the same regulation again from Sept. 15 through Nov. 30.
RELATED TOPICS