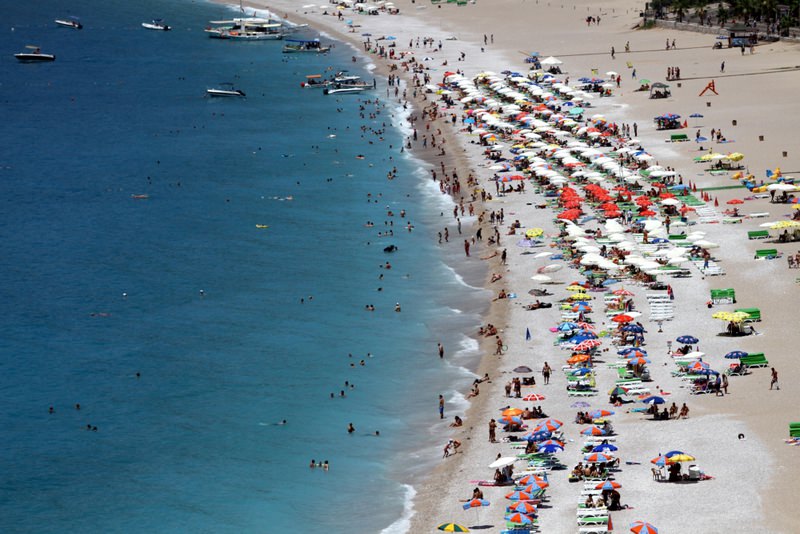 Holidaymakers enjoy the sea and fine weather in an aerial view of a Southern Aegean coast.
by Onur Alten Aug 26, 2015 12:00 am

The tourism competitiveness index shows that Turkish tourism is not competitive enough for its volume and potential. The tax-free tourism zone plan that the economy minister proposed might solve that issue

Turkey is currently struggling to capitalize on its tourism potential. Despite being sixth in terms of countries attracting the greatest number of tourists in the world, Turkey has lagged behind other countries in a number of categories on the tourism competitiveness index. Turkey ranked 44th among 141 countries on the 2015 Travel and Tourism Competitiveness Index that the World Economic Forum (WEF) published in order to reveal countries' performance in the tourism sector.

According to the WEF's 2015 index, Turkey ranked 12th in tourism revenues and ranked 44th in tourism performance, which included categories such as transportation, the environment and security and safety. The highest score was achieved in health and hygiene, tourism services infrastructure, air transport infrastructure and business at 5.41, 5.04, 4.66 and 4.54 points, respectively, out of seven points. The score achieved in the air transport infrastructure category allowed Turkey to rank 16th among 141 countries, while topics such as environmental sustainability, the protection of natural resources and safety downgraded Turkey's scores to the lowest levels.

Speaking to dunya.com news, Professor Orhan İçöz, the head of the Tourist Guiding Department at Yaşar University, said Turkey couldn't escape the middle-income trap in tourism like in the economy. "Ranking 44th in terms of the number of tourists visiting the country and tourism revenues entail the tourism sector's need to reassess itself," he added.

According to İçöz, the fact that transportation in Turkey is based mostly on land transportation and that railway lines were ignored for many years and port services are rendered in a limited number of regions, create a negative impression of Turkey for foreigners who want to visit the country. Also, the destruction of green zones with various purposes in recent years and people's weak environmental consciousness causes Turkey to have low scores in the category of the protection of natural resources.

Prior to the announcement of the tourism competitiveness index, a plan detailing tax-free tourism zones was revealed by Economy Minister Nihat Zeybekci, who said Turkey has significant potential in the tourism sector. The main purpose of the plan is attracting more tourists by providing convenience and ease that the tourists have yet to experience in Turkey. The project to materialize this plan will be done cooperatively by several ministries, under the leadership of the Economy Ministry and the Culture and Tourism Ministry. Tax-free tourism zones will surely boost Turkey's competitiveness in tourism, as the project addresses the key elements of the tourism sector's shortcomings that were detailed in the WEF's 2015 ranking.

Zeybekci said tax-free tourism zones will be established in the Aegean and Mediterranean coastal provinces, specifically Çeşme, Bodrum, Didim, Marmaris and west of Antalya. The project envisions foreign boats and ships docking in order to bring tourists who can enter without passports by removing the border and customs burden on foreign tourists. The zones will have entertainment services and shopping malls that target tourists in the high-income group.

The zones would adopt a fast-paced tourism approach where the tourist inflow and outflow would be continuous, with cruise ships and yachts docking in order to satisfy different needs as well as shopping and hotel accommodation. These would significantly improve the infrastructure of Turkey's tourism sector, especially in terms of transportation by sea. Since the zones would be scattered around the top coastal regions in Turkey, the project would make Turkey a more convenient destination for cruises or yacht tours in the Aegean and Mediterranean seas. Turkey's main tourism competitors enjoy a border advantage over Turkey, as the likes of Spain, Italy and Greece have their borders open to those who bear EU passports. Especially for this reason, Greece's islands in the Aegean Sea are ideal destinations for cruises and yacht tours, something that Turkey cannot currently compete with. Establishing free tourism zones would be a major step towards becoming more competitive in that regard.

In terms of security, the free tourism zones will be an improvement to Turkey's tourism sector since it would require Turkish citizens to go through border control, which automatically relieves any safety concerns. The problems along the southeastern border create terrorism concerns all over the country, which may scare away some foreign tourists. However, if these free tourism zones are implemented, a line will be drawn between these and any security concern related to Turkey's current state. As it is seen from the recent events in Tunisia, terrorism significantly damages a country's foreign tourist inflow; hence, regulation that removes any possibility of security problems would benefit the Turkish tourism sector tremendously.

The Ministry of Forestation will also take part in the free tourism zones, and construction of the facilities of the zones will be specifically done in a way that will limit deforestation and protect the natural environment, Zeybekci assured. This means that the project will not damage Turkish tourism in the environment related competitiveness aspects listed by WEF, while it might even contribute in that category by creating areas that are more environmentally rich and sustainable than any Turkish tourism compound.
RELATED TOPICS