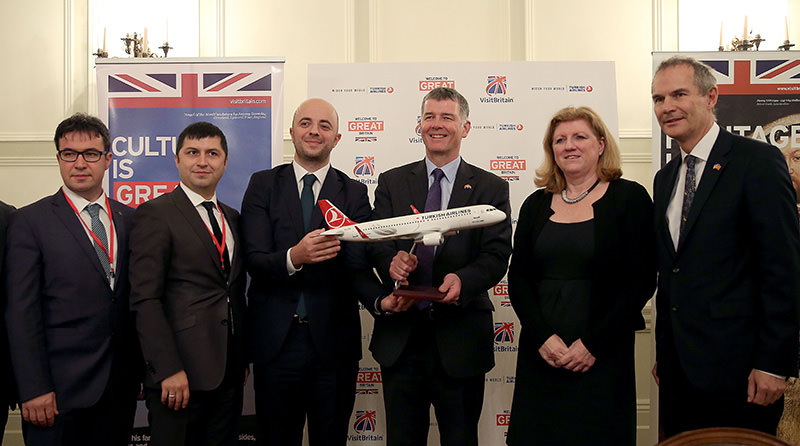 by Dogan News Agency Jan 12, 2016 12:00 am
Turkish Airlines signed an agreement with VisitBritain on Monday to make the U.K. the "hit destination" in 2016. The campaign primarily seeks to attract tourists to the U.K. from India and Gulf countries.

The global marketing agreement targets bringing more international passengers to the Manchester, Birmingham, Edinburgh airports as well as London's Heathrow and Gatwick airports. Turkish Airlines already flies to 284 zones in 113 countries across the globe, and set India as a focus for its 2016 targets in cooperation with VisitBritain in order to increase the value of tourism exports to the U.K.

Olmuştur defined the agreements as an "exciting collocation" between the two companies, expecting a significant contribution in terms of visitor numbers.

The U.K.'s numerous regions will be discovered thanks to the cooperation, Balcombe added, stressing that the global flight network would offer growth in rising Asian and Middle Eastern markets.

Moore said the close relations in different areas from science and innovation to the economy, and said: "The VisitBritain program [enlarges] Turkish Airlines and [provides a] direct contribution to Turkey's economic development through a strategic partnership."
Last Update: Jan 12, 2016 4:28 pm
RELATED TOPICS