Turks may be exempted from EU visas, according to Barroso 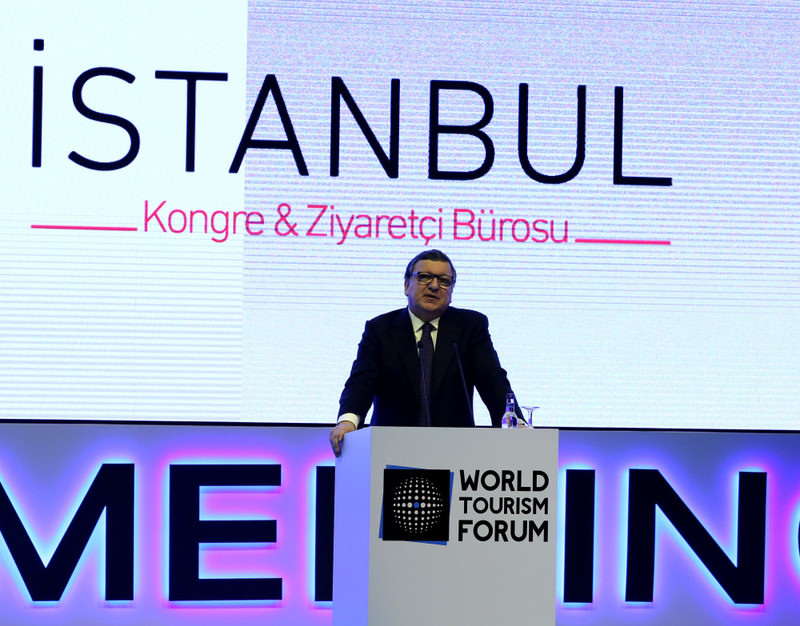 by Daily Sabah with AA Feb 06, 2016 12:00 am
Jose Manuel Barroso, former chairman of the European Commission (EC) who served from 2004 to 2014, implied a European Union Schengen area visa exemption for Turkish citizens is close to being finalized, adding that great steps have been taken to lift the EU visa requirements applied to Turkish citizens. Moreover, while he was chairman of the EU, some member states objected the visa exemption; however, Turkey now meets the required conditions, thus a visa exemption can be implemented.

Attending the opening ceremony of the World Tourism Forum (WTF), organized at Istanbul's Lütfi Kırdar International Congress and Exhibition Center, Barroso discussed the effects of politics on tourism, which greatly impacts economies and contributes significantly to a country's economic growth. He added that while tourism is the third-largest economic sector in Europe after trade and construction, Europe's benefits from tourism is not limited to merely the economy but also culture and society. "Tourism is a major economic activity with positive impacts on the economy and specifically on employment," he stressed.

Highlighting the relatively low euro and dollar exchanges' positive effects on the number of tourists, Barroso said in addition to regional conflicts and wars, economic uncertainties and market volatility across developing economies are mostly due to threats against security. Moreover, the upcoming presidential elections in the United States and the strategic stance of major geopolitical actors in the world are also contributing factors to such problems.

Barroso said he believes the impact of the violent jihadist movement and extremism that is on the rise in the Middle East, as well as the further escalation of conflict between Saudi Arabia and Iran, will continue to worsen in the Middle East.

His opinions on market volatility were also negative. Because of the high debt of both the public and private sectors along with the drop in investments due to security threats, he believes volatility will continue even if interest rates are negative. Barroso added that these factors also trigger extremism, as can be seen in the xenophobic and populist stance of Republican presidential candidate Donald Trump.

"There are no countries facing economic stagnation in Europe; however, while the economy may improve, politics may deteriorate due to the apparent xenophobia and populism in Europe, which will only be heightened by refugees. This will cause an existential problem in Europe regarding the freedom of travel, especially as the discussions are being held for the United Kingdom to withdraw from the EU. This will not mean losing the freedom of travel, but will limit the benefits. Some people confuse security threats and terrorist attacks with the current refugee problems, but I believe Europe will overcome this problem," Barroso said.

Regarding whether refugee issues would have arisen if there were no Schengen visa regulations in place, Barroso discussed the couple killed in San Bernardino, California, and that the perpetrators were not members of DAESH, but were inspired by them. He added that such incidents had not occurred due to the lack of visa restrictions but the lack of intelligence and proper security measures.

Barroso also emphasized that caution should be taken against those trying to undermine the refugee system and that drawing a border between Belgium and France will not deem Europe more secure. Such safety and security could only be accomplished by improving intelligence services, security and security forces, as the threat of terrorism has become a global threat.

He stressed the greater role Turkey might play in the refugee crisis in Europe, and said the Schengen visa exemption for Turkish citizens is close to being finalized, as the country has demonstrated great potential for growth.

Answering questions from members of the audience and the press after his speech, Barroso said he does not believe closing the borders will stop terror attacks in Europe. To illustrate, he highlighted that the same terror threat also exists in the U.S. despite high security measures and the close relationship between the intelligence agencies and security forces. According to Barroso, closing the borders will not improve the intelligence agencies' capacity in the fight against terrorism; therefore, he highlighted the need for cooperation between Turkey and the EU.

He added that religious beliefs and terror should be distinguished from each other, and cited Trump as an example of someone who negatively conflates the two. "[Trump] is the leading candidate of the Republican Party, yet his statements about Muslims border on being racist. The whole world needs to unite against terrorism, not only Europe. Also, stronger Muslim-majority countries should act as the leaders in this fight otherwise terrorists could easily claim they are fighting against the West. On the contrary, they are fighting against the good of humanity, and the countries in the region, such as Syria, are the victims. The main victims are not those in the West, but their own citizens."
RELATED TOPICS