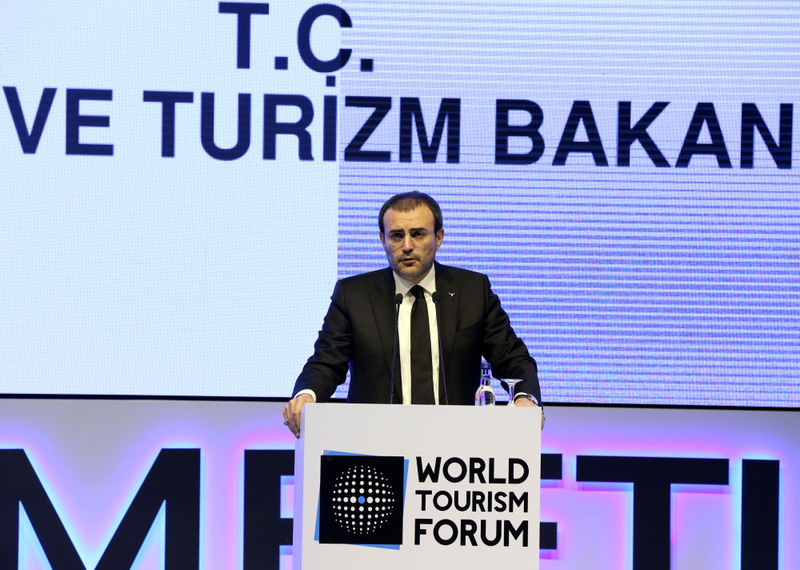 While the president of the World Tourism Forum said peace and cooperation are the main pillars of tourism, Tourism Minister Ünal stressed Turkey's critical role in the refugee crisis and said Turkey is a tourism giant

During the opening ceremony of the World Tourism Forum (WTF), the three-day event that started on Feb. 4 at Lütfi Kırdar Congress Center in Istanbul, WTF President Bulut Bağcı gave the inauguration speech, highlighting the objective of the WTF as creating an international platform through which future tourism policies are determined, based on the concepts of peace and cooperation. He expressed the necessity of cooperation, saying it is a fundamental factor in the development of the activities in tourism. Speaking about the importance of peace, he said peace is the best solution for the regional turmoil and terrorism, which are the enemies of tourism since the international interactions are great contributors to tourism. Bağcı concluded his speech with a reminder that the WTF Gulf and Asia meetings will be held in May, which will be followed by a Mediterranean meeting toward the end of 2016 in Turkey's popular southern resort city Antalya.

Following Bağcı's speech, Culture and Tourism Minister Mahir Ünal touched on the negative impact of terrorism on liberty as well as tourism, saying, "We need to protect our freedom of travel and the spirit of tourism in order to fight against terrorism, which aims to prevent our freedoms by creating fear and security concerns." He added, "The most significant driving power for peace, brotherhood and unity is tourism."

In reference to recent tensions between Turkey and Russia, Ünal said tourism should be supported regardless of the problems between states, since Moscow has re-imposed visa requirements on Turkish citizens. "Tourism, which has a positive impact on international relations, should not be used as a way of imposing sanctions," Ünal underlined.

Recalling that Turkey ranks sixth in the world tourism sector and tourism in Turkey has an annual volume of $36 billion, Ünal expressed that Turkey had achieved almost all of its goals in terms of tourism for 2023, when the Turkish Republic will celebrate its 100-year anniversary. He added that although there has been much turmoil, these could turn into opportunities, saying, "since Nov. 24, the Economic Coordination Council gathered four times and we decided to regard the tourism sector as an export sector. In this process [at times of crises], you need to take every necessary measure."

Ünal underlined that Turkey has the best tourism infrastructure in the world and a great treasure of culture, having hosted 69 civilizations. Ünal added, "What do we have to do at this point? We need to revive our culture economy and plan wisely through which channels tourism will meet, [considering the advantage of our culture economy]?"

Recalling that Turkey currently hosts more than 2.5 million refugees, Ünal said, "we have spent $7 billion. We have been continuing international negotiations in order to prevent the spreading of this problem to the other parts of the world. We are taking the necessary security measures so that the tourism sector does not get negatively affected. If we portray the terrorism problem, solely experienced in three districts, to the world as if it was experienced in the whole country, this would be the biggest harm we can possibly give ourselves."

Minister Ünal added, "[Some] have been trying to spread around the idea that Turkey is not a secure country and that the tourism sector is not in good shape. The tourism sector is not only bound to face international problems, but is also target of wrong political positioning. On both the domestic and global scale, it is very important for the tourism to accept terror as a global problem, react to terrorism in a massive way and not to use `terror` as a political tool."

Speaking at the opening ceremony, Serge Trigano, president of the international hotel chain Mama Shelter, thinks that Turkey has "great tourism advantages," and is a key destination despite problems in the country. He also said Turkey's national flag carrier, Turkish Airlines, was "one of the most successful airlines in the world."

Turkish Airlines currently has a network of more than 280 direct flights, and travels to more countries than any other airline, connecting Istanbul with five continents.

Istanbul, accepted as a global tourism player, currently serves international airlines at its two airports. A third airport planned for 2019 will cater to 150 million passengers, making Istanbul the largest airline hub in the world.