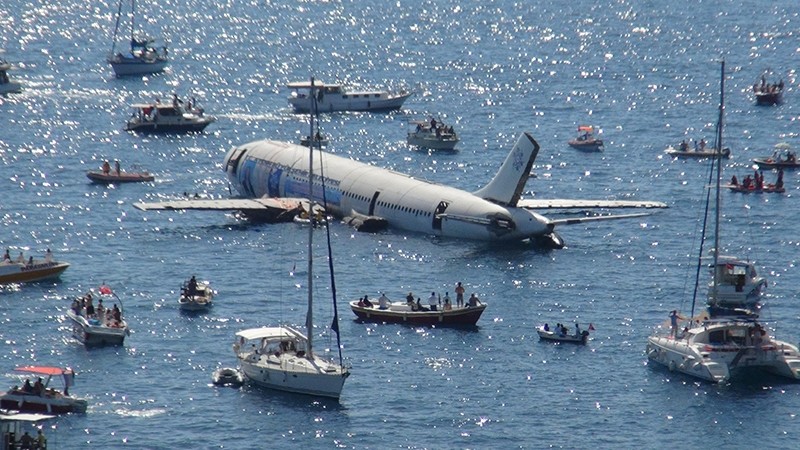 An Airbus A300 was sunk in the Aegean Sea off the coast of the southwestern resort town Kuşadası to serve as an artificial reef and attract tourists as part of a municipal project.

The airplane was brought on Saturday to the Güzelçamlı neighborhood of the town on five trucking rigs nearly 2 months after the dismantling process started in Istanbul on April 7.

The plane, which is reportedly the biggest plane ever used as a reef, cost 270,000 Turkish Lira, is 54 meters long and 44 meters wide.

Parts of the plane were slated to be sunk with lifting cranes, while heavy construction equipment was used to maintain control during the process. Floating balloons were tied to parts of the plane while the whole body was brought down 20 to 25 meters with the help of divers, a process which took about 2.5 hours.

"With this project, the aim is to increase the underwater biodiversity off [the] Kuşadası [coast] and to further develop underwater tourism in the area. We expect some 250,000 domestic and foreign tourists per year to come here for diving. With the project, Kuşadası will hopefully close this summer … with the fewest losses and make the people of [Kuşadası] and the people in this business smile. In short, [June 4] will be a milestone for Kuşadası tourism," said Aydın Metropolitan Mayor Özlem Çerçioğlu.

The Airbus A300 is not the first plane to be submerged for underwater tourism in Turkey, as there have been three other small-sized planes that have been sunk off the southern province of Antalya and its Kaş and Kemer districts since 2009. Another plane was also sunk in the Akçakoca district of the northwestern province of Düzce to serve as an artificial reef.