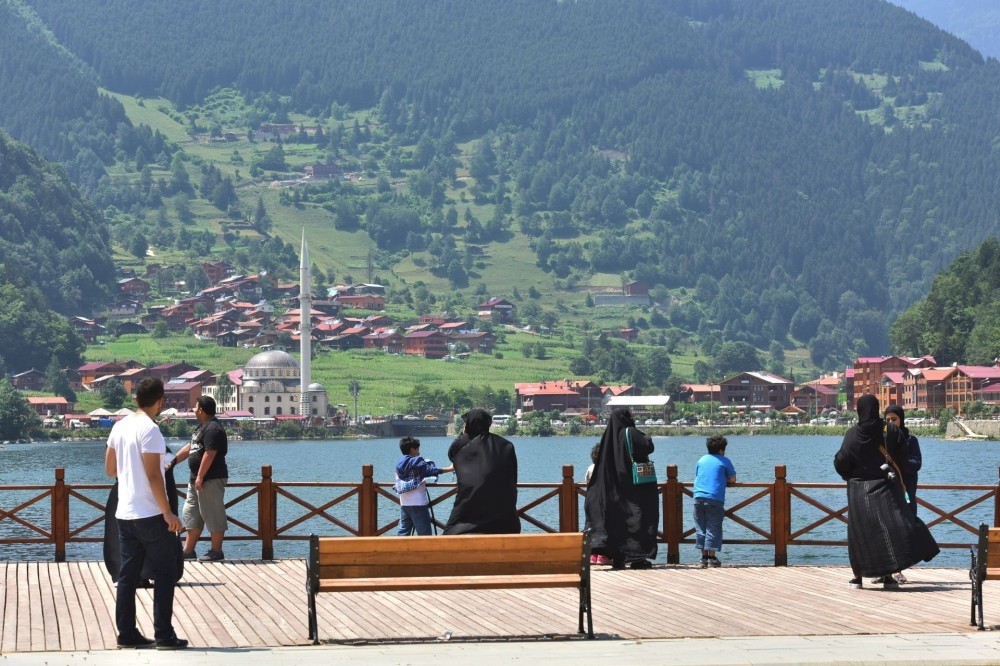 Arab tourists' interest in the Eastern Black Sea Region has rapidly increased over the past two years. Arabs, especially those from Gulf countries, have purchased a great number of residential properties, particularly in Trabzon. According to Trabzon's mayor, the city gained over $1 billion worth of tourism revenue from Arab tourists. Due to their intense interest, Arabic script was added to signs across the city, as well as Arabic courses for merchants becoming available.

Citizens of Saudi Arabia, the United Arab Emirates, Kuwait, Egypt, Qatar and Jordan have lived in Turkey's Eastern Black Sea Region. According to Güray Ervin from Al Jazeera, the reason why Arabs visiting Rize, Artvin, Ordu, Giresun and particularly Trabzon's city centers and highlands prefer this region is its cold and rainy climate, along with its natural beauty.

Majed Alabdali, a public official from Saudi Arabia, said he has been coming to Turkey for vacation for the past 20 years with his family and has visited Istanbul, Bursa and Yalova so far.

"We came to Trabzon for the first time this year. We especially loved Uzungöl. Turkey is a really beautiful country. We went to Rize, saw Ayder Highland, but Uzungöl is different. People in Turkey are really friendly. We sometimes encounter language barriers from time to time, but we understand each other one way or another. We are more comfortable here than Europe. We wish to buy an apartment in Trabzon and stay at our own place."

Speaking to Al Jazeera, Trabzon Governor's Office announced that 1,081 people coming to the city from Arab countries over the past two years bought 1,271 residential properties. Saudi Arabian Abdulrahman Al Secait said he came to Trabzon with his family after he retired and he loves the area.

"We loved the people in this region and saw Trabzon as a place to live in. We love rain and cold weather. Here there are many opportunities offered by nature. There are many places to visit and see. We will stay in this apartment during holidays for now. We later want to stay permanently. They take good care of us here. There are very few merchants who can speak foreign languages. This is the only problem we have. We understand each other via smartphone apps or body language."

It is possible to run into people from Kuwait, Qatar, Jordan and particularly Saudi Arabia in Trabzon. The real estate sector has been having a profitable time, as well as the tourism sector. You can come across real estate signs around the city written in Arabic.

Ömer Saka, a real estate consultant from Trabzon, had brochures printed for his Arab customers and added Arabic translations of the Turkish signs on his office window. He is also employing a translator in order to properly communicate with Arab customers. Saka said Arabs took an interest in the airport and Yorma region.

"Arabs want their homes with sea views nested within greenery. It is important for the apartment to be within a housing estate and safe. Housing prices range from TL 250,000 to TL 1 million in accordance with the size. Some of our customers leave the decoration of the house to us after buying it."

Trabzon Metropolitan Municipality also placed Arabic translations of signs pointing to historical and tourist sites and started foreign language courses for the area's merchants. A total of 135 of them finished the courses and got certificates. According to the municipality's Department of Press and Public Relations, while 30,000 Arab tourists came to Trabzon in 2010, this number went up to 410,000 last year. At first, the average period for an Arab tourist to stay in the city was 1.4 days, a figure which is expected to go up to eight days, as 16 new hotels are to be opened in the region. Speaking at the opening ceremony of the tourism season, Trabzon Mayor Orhan Fevzi Gümrükçüoğlu said in 2015 Trabzon gained $1.3 billion worth of tourism revenue from Arab tourists.

Arabs prefer to come and travel on their own rather than coming with tour agencies. They choose their own hotels, vehicles, drinks and food. While 25,000 Arab tourists visited Rize in 2013, this number reached 47,000 last year. Wishing to increase the number of tourists visiting the city, Rize Governor's Office attended national and international tourism fairs. A new four-star hotel began operating in Rize last month. Five five-star hotels are expected to open as well. The tourists coming to Rize prefer to visit Ayder Highland and its surroundings as well as Fırtına and İkizdere Valleys.

The Ordu governor's office started two promotional projects; "Ordu's streams are flowing to tourism" and "Millions share Ordu" in order to attract Arabs into the region. In addition, they promoted the region by inviting over a hundred Arab reporters. Ordu Governor İrfan Balkanoğlu said direct flights from Saudi Arabia would start as well.

"After the promotional activities, the businesspeople from Gulf countries said they wanted to invest in Ordu. They said they could open holiday villages, elderly nursing homes and golf courses. An appropriate spot was discovered in the Çaybaşı district. They applied to get the necessary permits. The first flight to Saudi Arabia will take off at Ordu- Giresun Airport on June 19."

The number of Arab tourists in Ordu has been rapidly increasing over the past two years. While 14,000 tourists visited Ordu in 2013, this number went up to 29,000, and it is expected to reach 50,000 this year.
RELATED TOPICS