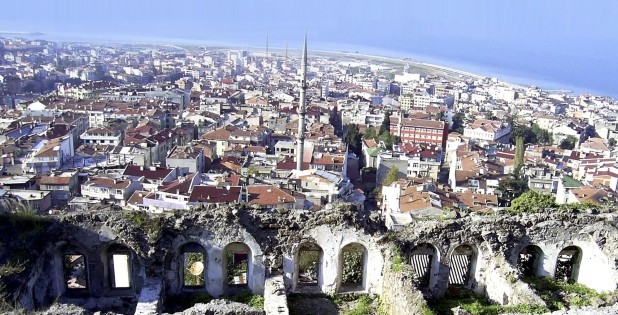 Rich in historical and natural treasures, Trabzon province is getting ready to open an ancient convent to visitation after a meticulous restoration process

The restoration of a convent, Kızlar Manastırı in Turkish, located in the Boztepe district of Trabzon, is nearing completion, the authorities have announced. Speaking to Anadolu Agency (AA) about the restoration of the historic monastery and its deep-rooted role0 in the city's history, Trabzon Municipality Mayor Orhan Fevzi Gümrükçüoğlu emphasized the city's significance as a center of Turkish history, art, civilization and culture, drawing attention to its potential as a tourism hub as well. "In efforts to promote Trabzon, we are focusing on restorative and renovative projects; namely, the restoration of the Kızlar Manastırı, which was built with a commanding height and established under the same scope," the mayor said. The restoration project, organized by the Metropolitan Municipality, will be launched by the Culture and Tourism Ministry. As building surveying and various restorative efforts are nearing completion, the building is expected to contribute to the region's tourism industry and the country as a whole.

Mayor Gümrükçüoğlu underscored the importance of including the historic monastery in the city's tourism activities, saying that "after restoration efforts are completed, the Kızlar Manastırı will breathe new life into the cultural, artistic and touristic activities of Trabzon as well as neighboring regions. With the opening of the historic building, Trabzon will continue to be the shining star of Turkish tourism." Mayor Gümrükçüoğlu claimed that Kızlar Manastırı will attract the attention of history lovers to the region and the building will be a center of attraction for tourists.

A stone church building and frescos were also discovered during the project, and the mayor says that shopkeepers in the area are very happy, feeling very strongly that the region will become a strong tourism hub upon completion of the projects. Built on the Boztepe slopes between 1349 and 1390, the monastery began operating during the reign of Alexios III of Trebizond. The monastery building underwent renovation over the centuries, with its last renovation being concluded in the 19th century. The monastery building includes a stone church, a chapel, several cells and frescos which once belonged to Alexios III and his wife in the church.
RELATED TOPICS