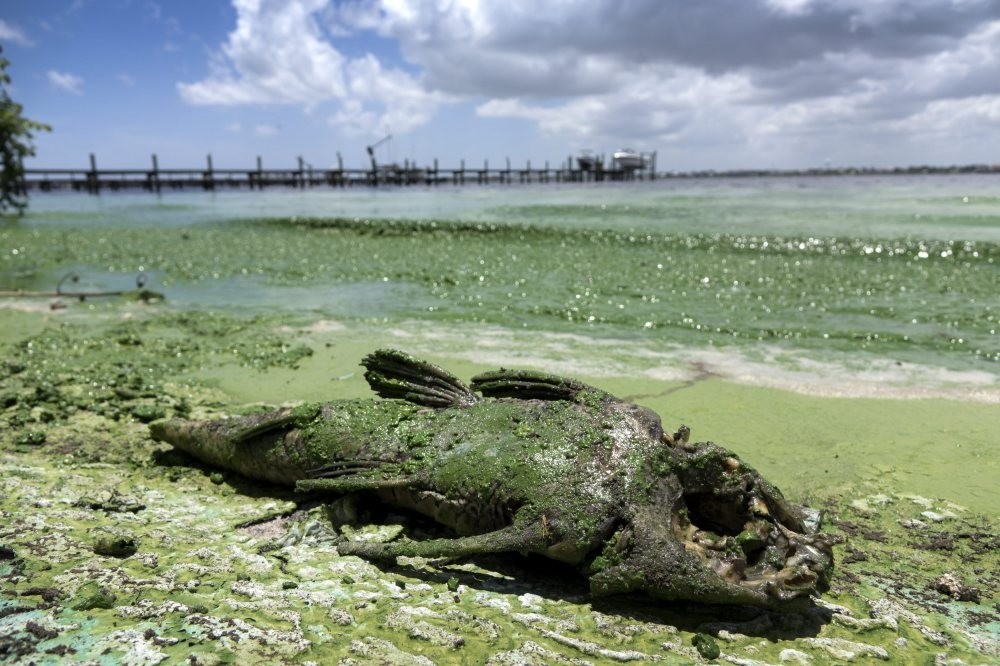 A dead fish at the Central Marinau2019s entrance in Stuart, Florida, contaminated by Blue-Green Algae from the Lake Okeechobee. Some of the South Florida Beaches have had to be closed due to the Blue-Green Algae, from Lake Okeechobee.
by Jul 09, 2016 12:00 am
Every night Tim Robinson sleeps in his boat, which floats atop a blanket of foul-smelling bright green slime. For houseboat dwellers like Robinson, the toxic algae bloom spreading through Florida's Lake Okeechobee - the nation's second-largest freshwater lake - is more than just unpleasant. It's alarming.

"We don't know if we should be breathing this," the 53-year-old Stuart resident told Agence France-Presse (AFP). "I sleep on top of it every night."

Robinson's two boys haven't stayed with their father in two weeks for fear of the algae's effects.

"It's so depressing," he said. "Everything we do is in the water and on the water."

Stuart, a town on east Florida's Treasure Coast, is about 175 kilometers north of Miami. It's often cited as one of America's best small tourist towns, particularly for its tropical climate and proximity to the St. Lucie River.

The turquoise canals, streams and lakes that zigzag among Stuart's islands make this small town a nirvana for beachcombers and water sport lovers.

But the thick layer of slimy blue-green algae - also called cyanobacteria - coating the water and smelling of sewage has dampened the town's appeal.

The putrid algal blooms, which appear mornings and evenings with the rising tide, are toxic and can cause rashes and respiratory problems.

"The economic consequences are grave and ongoing," said Sarah Heard, the commissioner of Martin County, the district that includes Stuart. This past weekend several beaches in the county closed during July 4th celebrations. Algae also kills sponges, oysters and other sea creatures integral to water filtration. "There comes a time when the water can no longer sustain life," Briceno said.
RELATED TOPICS