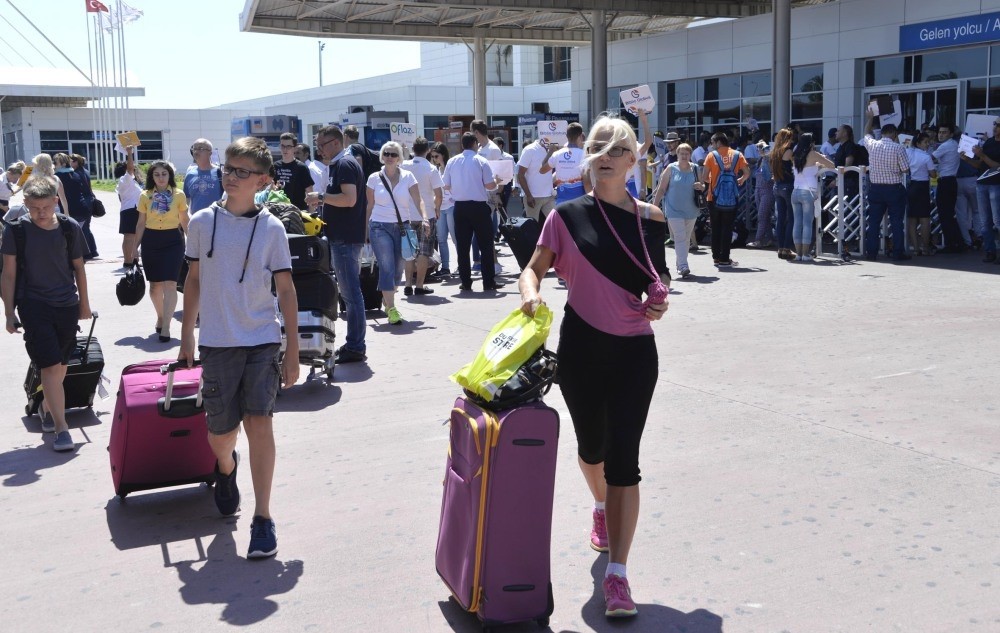 Turkey's tourism sector has become more optimistic following the arrival of the first Russian plane. While waiting for charter flights from Russia to resume, occupancy rates at hotels are expected to see an additional rise of 10 percent

Following the arrival of the first Russian tourist convoy in Antalya on Saturday, Turkish hoteliers say hotel occupancy rates will vary between 50 percent and 80 percent in July and August, adding that 1 million Russian tourists expected to travel to the country in this period will contribute nearly 10 percent to occupancy rates.

Stressing that Russian tourists will also contribute to occupancy rates in September and October when seasonal tourism activities are on the decline, hoteliers stated that charter flights from Russia to Turkey should resume soon. Hotel managers also evaluated Russian Prime Minister Dmitry Medvedev's order to relevant bodies to study the resumption of charter flights to Turkey, saying that it is a "promising" development which will gradually increase arrivals when necessary promises are met.

Turkish Hoteliers' Federation (TÜROFED) Chairman Osman Ayık said the first tourist convoy from Russia has arrived by scheduled flight and underlined that charter flights must commence soon. He described Medvedev's statement as "promising," adding that "We think charter flights will start as of the third week of July. From then on, arrivals will gradually increase." Ayık suggested that Russian tourists will make an additional 10 percent contribution to occupancy rates in tourism facilities, adding, "If nothing goes wrong, foreign visitors' overnight stays might reach 50 million."

Anex Tour Chairman Neşet Koçkar noted that the Russian government will issue necessary permits for the resumption of charter flights after July 17, adding, "We revised our plans accordingly." Koşkar expects that between 750,000 and 1 million Russian tourists will come to Antalya by the end of the year. Meanwhile, the months of July and August are expected to go much better due to a dynamic domestic tourist base as well as Russian tourists. The Russians are expected to make the greatest contribution in September and October when seasonal tourism activities are on the decline.

Pegas Tour Chairman Ramazan Akpınar stated the company will bring its first Russian tourist group via a scheduled Turkish Airlines (THY) flight on July 14, stressing that they will initiate frequent flights after permissions for charter flights are received.

Following Turkey's steps to normalize the strained relations with Russia, Rossiya Airlines' Boeing 737- 800 plane landed at the Antalya airport with 189 passengers on Saturday. The first Russian tourist convoy to arrive in Turkey in nearly a year was welcomed by Antalya Airport Local Authority and Deputy Governor Mehmet Yavuz, the Antalya General Directorate of State Airports Authority (DHMİ) Head Manager Osman Serdar and ICF Airports managers. Following a cocktail party that was held for Russian tourists at the passport control point, tourists were transferred to hotels.

Deputy Governor Mehmet Yavuz said the flight was conducted as part of a tour package sale which was previously permitted. Pointing to the fact that there is yet to be permission granted for charter flights, Yavuz said, "This flight completely consists of passengers who bought tour packages. So, we can call it a scheduled flight looking like a charter flight."

Fit Holidays, which operates within Akay Travel, the main Turkish partner of a leading Russian tour operator, Biblio Globus, prepared a special welcoming ceremony for the first Russian plane landing in Antalya. Akay Travel Board Member Mine Okudur said that Biblio Globus made an agreement with Rossiya Airlines - the charter branch of Aeroflot Airlines - that will remain in effect until the end of the season. Okudur also noted that Biblio Globus has begun operations with three flights from Moscow a week, adding that operations will include 5,000 passengers when flights from St. Petersburg and other cities are added in August. Underlining that nearly 1 million Russian passengers are expected to come to Turkey before the end of the year, Okudur said, "Some cannot come to Turkey as they booked holiday resort packages in Russia. There are others who are still uneasy. Despite all this, there is a great interest in Turkey. All of those who we interview say they are greatly happy to come to Turkey."

Russian tourist Irina Sergeva said that she previously spent holidays in Turkey and will spend this year's holiday in Antalya as she loves the city's nature and sea, adding, "Positive developments between the two countries make us happy."

Another Russian tourist Sergei Baykov stated he has been taking a holiday in Turkey for 10 years, expressing his happiness of positive developments between Turkey and Russia.
RELATED TOPICS