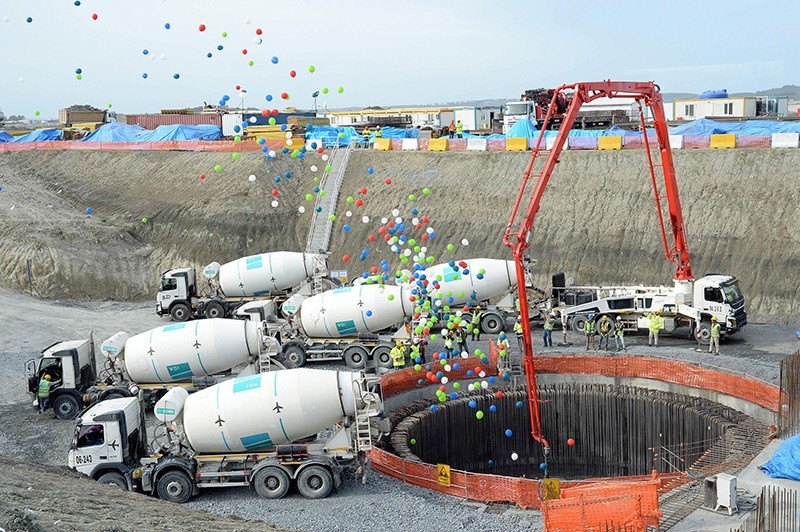 The construction of the air traffic control tower of Istanbul's future third airport began with a groundbreaking ceremony on Wednesday.

The Transport, Maritime and Communications Minister Ahmet Arslan attended to the ceremony.

Arslan noted that the tower will have a key role in managing the air traffic of Asia, Africa, Middle East, Balkans, Caucasus and Europe as well as Turkey.

Minister Arslan said that the tower had competed with 370 other projects and was awarded the prize when it was still on paper.

Noting that Atatürk International Airport currently serves 1,300 planes a day on average with some days exceeding 1,450 landings and take-offs across two runway, Arslan said that two runways of the third airport's first phase will be able to serve 2,000 planes per day on average. He added that the construction of the first runway was nearly finished.

Arslan said that 20,000 people are currently being employed on the project, and this will surpass 30,000 next year.

Pininfarina and Aekom's innovative tulip-inspired design was announced on Dec.24 as the winner of the international design competition for the airport traffic control tower of Istanbul's third airport.

The AECOM and Pininfarina design is an elliptical tower that harnesses aerodynamics. The design combines speed, modernity and romanticism, while its tulip-inspired shape is a beautiful reference to the centuries-old Turkish tradition, which is associated with the tulip flower.

Initiated by the IGA (Istanbul Grand Airport), the contest saw many world-renowned designers from both aviation and automotive sectors compete. The tulip-inspired design was chosen from a total of six entries from international architectural teams such as Zaha Hadid, Moshe Safdie, Fuksas, Grimshaw-Nordic and RMJM.

The new airport is currently being built on the European side of Istanbul and the construction is expected to be completed by 2018. It will have an initial capacity of 90 million passengers per year, but with extensions it will be able to host 200 million.

The IGA consortium, which won a tender held in May 2013 to build Istanbul's new airport, is comprised of five leading Turkish construction companies - Cengiz, Mapa, Limak, Kolin and Kalyon.

In October, IGA made an agreement with Turkey's state-owned Halkbank, Ziraat Bankası and VakıfBank as well as foreign-financed banks DenizBank, Garanti Bankası and Finansbank for a €4.5 billion loan for the first phase of the aviation project.