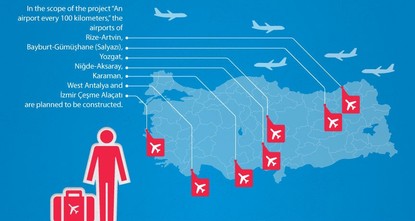 by Daily Sabah with AA Nov 24, 2016 12:00 am
As part of the project "One airport every 100 kilometers," Turkey plans to construct seven new airports in Yozgat, Rize-Artvin, Bayburt-Gümüşhane (Salyazı), Niğde-Aksaray, Karaman, İzmir (Çeşme Alaçatı) and western Antalya.

According to Transport, Maritime Affairs and Communications Ministry data, the government has taken fundamental steps to develop the aviation sector, one of the most important elements in the transport system, since 2003. In addition to aviation projects that have been actualized via the budget, the government has also paved the way for the private sector in the civil aviation sector through public-private partnership models and alternative finance and investment funds, leading to a decline in travel costs and making airlines "the way of the people." The number of operating airports in the domestic flight network will rise to 62 from 55 currently, with the construction of new airports in Yozgat, Rize-Artvin, Bayburt-Gümüşhane (Salyazı), Niğde-Aksaray, Karaman, İzmir (Çeşme Alaçatı) and western Antalya. 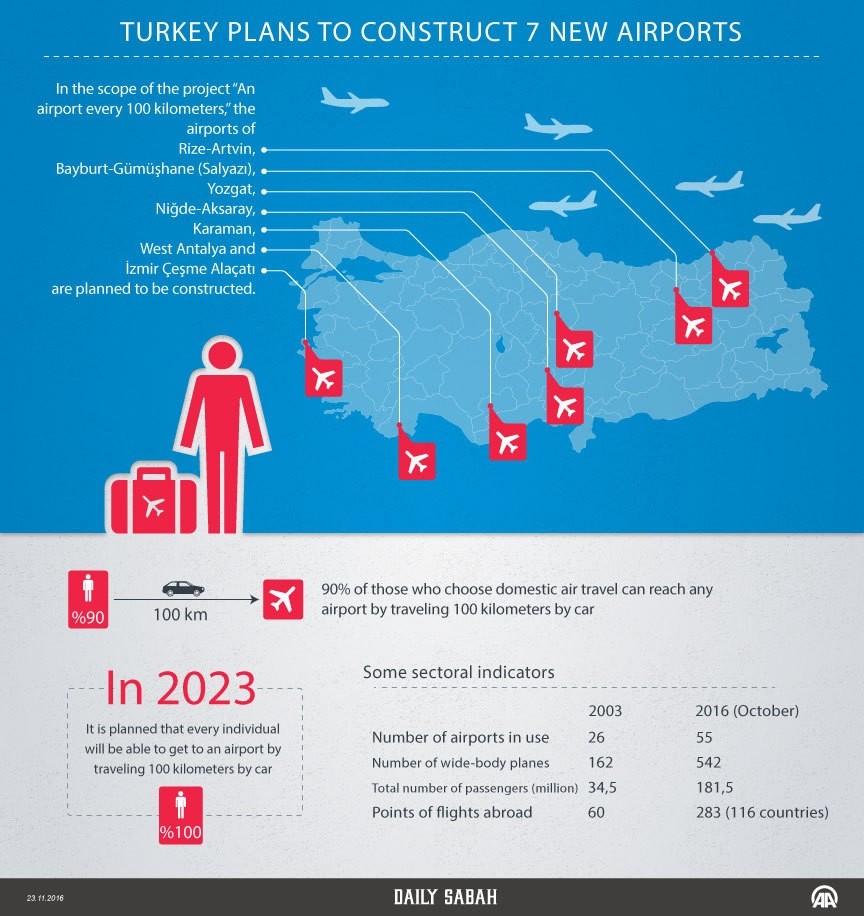 The number of wide-body aircraft in the Turkish aviation sector has soared to 540 from 162, while the number of airline passengers increased by nearly six times since 2003, surging to 181.5 million at the end of 2015. Meanwhile, the number of countries that have airline agreements with Turkey increased to 167 from 81, making a major contribution to the Turkish civil aviation sector. Turkey's international flight network also skyrocketed by 372 percent, while two airline companies were offering flights to 60 foreign destinations in 2003. Now, six airline companies provide flights to 283 destinations in 116 countries. The first phase of the Istanbul New Airport, which is scheduled to open in the first quarter of 2018, will be able to serve 90 million passengers a year. The airport will make Turkey one of the most important transit centers in the world and will turn over a new leaf in the Turkish aviation sector.
RELATED TOPICS