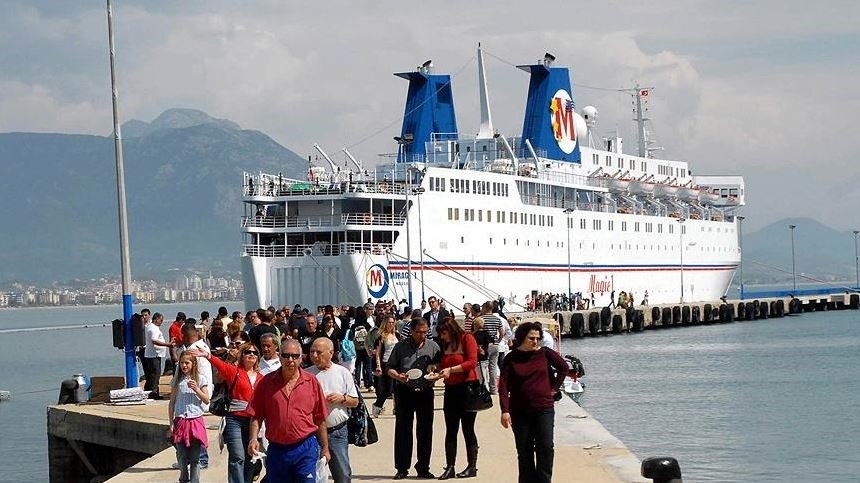 Israeli tourists arrive in Turkey as their ship docks at a southern Mediterranean port. (AA File Photo)
by Daily Sabah with AA Feb 05, 2017 12:00 am

The number of Israeli tourists visiting Turkey, which decreased after relations between the two countries went through a strained period following Israel's 2010 Mavi Marmara flotilla raid, started to increase over the past years as bilateral relations between the two countries have gradually improved following Israel's apology in 2013.

Next week, Turkish Minister of Culture and Tourism Nabi Avcı will visit Israel, partake in a tourism fair in Tel Aviv and will also attend the opening of a photo exhibition on Turkish-Israeli relations.

Culture and Tourism Minister Avcı will be the first high-ranking Turkish official to visit Israel since the Mavi Marmara incident.

However, in 2009, the then-Prime Minister Recep Tayyip Erdoğan's 'One Minute' crisis with the Israeli President Shimon Peres at the Davos summit, over Israel's human rights abuses against Palestinians, decreased the Israeli arrivals to 311,000.

Relations between Turkey and Israel drastically declined in 2010 following an Israeli naval raid on a Turkish aid ship, the Mavi Marmara, en route to delivering humanitarian aid to the blockaded Gaza Strip. The raid killed 10 activists.

The event caused an unprecedented crisis in the decades-long peaceful Turkish-Israeli relations. Both countries even recalled their diplomatic envoys following the massacre.

Consequently, the number of Israelis spending their vacations in Turkey followed the political trend. In 2010, 109,000 Israelis visited Turkey. In 2012 and 2013, the Israeli arrivals further dropped, and amounted to less than 100,000 per year.

In 2013, with Israeli Prime Minister Benyamin Netanyahu's apology to Turkey and the payment of $20 million compensation to the Mavi Marmara victims, Turkish-Israeli relations entered normalization period.

In Dec. 2016, both countries re-appointed ambassadors as part of the reconciliation deal and reiterated several times the necessity of further improvements in bilateral relations.