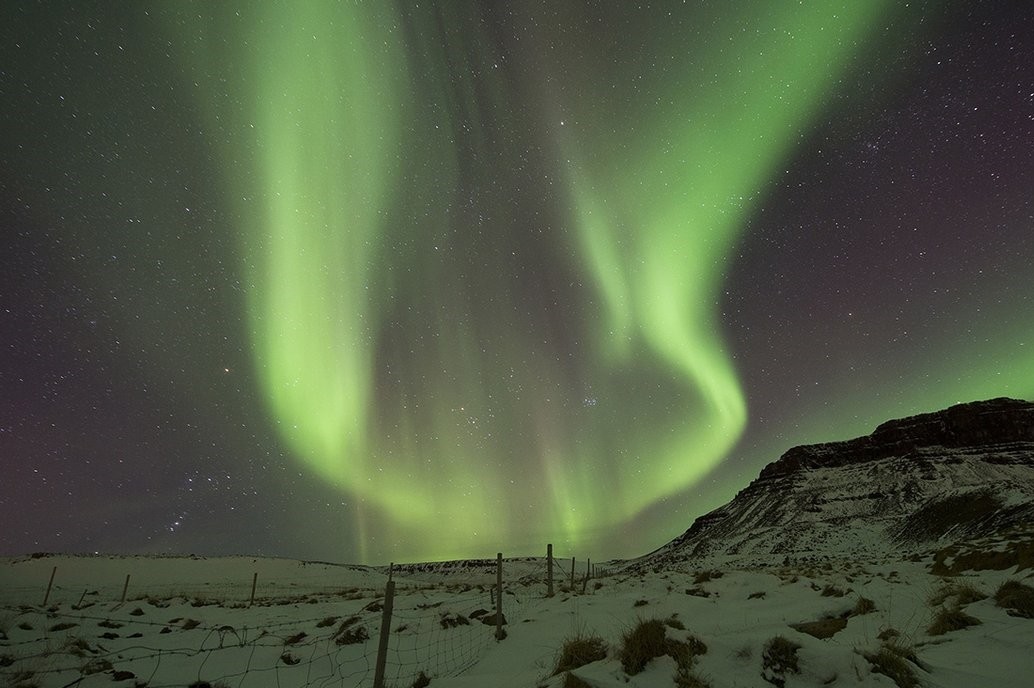 The Northern Lights, or the aurora borealis, appear in the sky over Bifrost, Western Iceland.
by Mar 13, 2017 12:00 am
With urbanization gaining pace and air pollution clouding the view in major cities, contemplating the stars in a pitch-black sky is fast becoming a rarity that tour operators are banking on as a new selling-point. From a total solar eclipse to the Milky Way to the Northern Lights, many experts at Berlin's ITB, marketed as the world's leading travel trade show, were making the case for astronomical experiences this year.

"Astro-tourism is really an increasing business. We now see a lot of travel agencies which offer this kind of tourism," Andreas Haenel, an astronomer and director of the planetarium museum in north-western Germany's Osnabrueck, told reporters.

While space tourism may be the holy grail for the most committed of stargazers, its astronomical price tag puts it out of reach for most, not to mention health and safety concerns over forays beyond the atmosphere. Enter astro-tourism, which allows enthusiasts of celestial movements to experience the natural phenomena with both feet firmly on planet Earth. With few places sufficiently dark for observations, some European and U.S. national parks have now classed certain areas as "dark sky preserves."

Meanwhile, deserts in Namibia, Botswana and Iran are marketed as ideal stargazing sites that also offer the exoticism of sandy dunes. Keyvan Lankarani, the European representative of an Iranian tour company, said the sector started developing in his country due to domestic demand.

"It really started within the Iranian market itself because of the vast central desert, we have pretty big spaces of darkness," he said. But beyond just searching for familiar favorites like Orion's belt or the Big Dipper, Haenel says recent years have seen a boom in "event astro-tourism," travel to witness an eclipse, a meteor shower, or the Northern Lights.

At the ITB show, the brochure promoting Canada's Yukon sold the moment that "you will never forget" when skies suddenly light up with colorful streaks as a result of gaseous particle collisions. Known commonly as the Northern Lights, the Aurora Borealis has become a major selling point for towns around the Arctic Circle.

"There has been an increasing interest since the last four years. It has to do our marketing of course and an awakening," said Ellen Kachel of the Northern Norway Tourist Board, noting that demand has grown in particular among Asian clients.

The northern Norwegian city of Tromso has seen the number of visitors explode, and every photo shared on social networks only serves to fuel further interest for the region.

But this year, the big astro-tourism seller is the August 21 total eclipse of the sun, which will only be visible along a stretch running from Oregon to South Carolina, cutting diagonally across the United States.

"Nobody knows how many tourists are going there; the estimations go from several hundred thousand to several million people. But it seems to be becoming a great event," said Haenel. In Idaho, the tourism sector is already in full gear to welcome an influx.

"We are almost sold out," said Nancy Richardson of Idaho Tourism, adding that, "We've been selling this product [the solar eclipse] for two years already."

Illustrating how magical such experiences can be, Richardson recounted the story of a tourist from a polluted Chinese city who had tears in his eyes when he saw the Milky Way from the dark Idaho mountains for the first time. After all for some on the planet, starry skies are already a thing of the past.
RELATED TOPICS