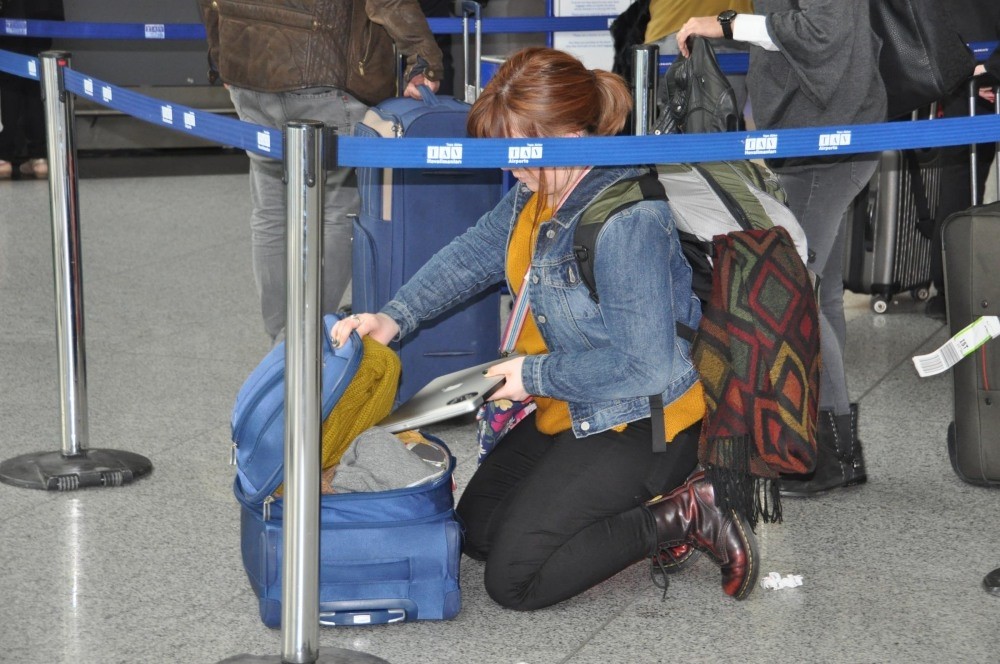 A passenger in Istanbul's Atatu00fcrk Airport puts her laptop in her luggage as she travels to the U.S.
by Daily Sabah with AA Mar 24, 2017 12:00 am

Turkish ministers react to the recent U.S. and U.K. decisions as some believe the airline electronics ban was to hinder trade rather than a security measure. Ankara will take the issue to the ICAO

Minister of Transport, Maritime and Communications Ahmet Arslan Thursday said Ankara would take the partial ban on electronics in the cabins of commercial airplanes, established by the U.S. and the U.K., to the International Civil Aviation Organization (ICAO).

"The presiding authority over this issue is the ICAO," Minister Arslan told reporters, stressing: "We [Turkey] are also a ICAO council member. We will continue fighting against [the ban] in the ICAO. If you are afraid of terror, you should be afraid no matter where it comes from and take measures accordingly," he added.

Arslan said that the Transport, Maritime and Communications Ministry has sent a letter to the U.S. demanding that it remove Turkey from a list of countries subject to the restrictions, noting: "In our letter to officials, we stressed that terror activities and terrorists are present in every corner of the world and the fight against them should be performed in synchronized coordination across all parts of the world," he said.

Minister Arslan went on to say that no one has the right to say that "Turkey fails regarding this-or-that issue."

"There is not even a single deficiency [in Turkey's system]. We are implementing measures even ahead of the requirements to be presented by the ICAO and will continue to do so," he added. Arslan had previously lashed out in response to the U.S. ban, saying: "This practice is neither fair for our country nor for the U.S.," speaking after the restrictions made global headlines Tuesday.

ICAO, an agency of the U.N., said on Wednesday that it should be up to each country to decide whether to implement security measures, saying in a statement that it supports "global uniformity" in regulating the facilitation of international travel. "Finding an effective balance between safety and security is always a priority in global aviation," the statement read.

New restrictions on electronic devices in cabins on flights from Turkey to the U.S. and the U.K. aim at stifling economic growth, Trade Minister Bülent Tüfenkci said yesterday, saying: "We believe that the ban is not about security issues but commercial concerns, especially when we consider the recent development of Turkish Airlines (THY)," he told Anadolu Agency (AA) in the eastern province of Malatya. "This ban is also an obstacle to the development of countries' commerce," Tüfenkci added.

Under the restrictions, only small electronics such as cellphones are allowed in the cabin, while larger devices such as laptops or tablets must go in checked luggage. Medical devices are exempt but still have to be scanned before being taken aboard.

Turkey negotiating with US, UK

According to Tüfenkci, Turkish police and customs officers have already taken precautions to ensure flight security. He said, "The most recent technological devices are used [at airports]," adding, "We have not detected anything in computers and tablets so far that would cause such a problem."

On Thursday, Foreign Ministry spokesman Hüseyin Müftüoğlu said Turkey had been negotiating with the U.S. and the U.K. to exclude Ataturk airport and THY from the ban list.

Turkey's national flag carrier, THY operates nonstop flights to the U.S. and the U.K. from Istanbul's Ataturk International Airport which saw just over 60 million passengers in 2016, according to data from TAV Holding.

The U.S. Homeland Security Department said a "small percentage of flights" to the U.S. would be affected and the regulations would remain in place "until the threat changes."