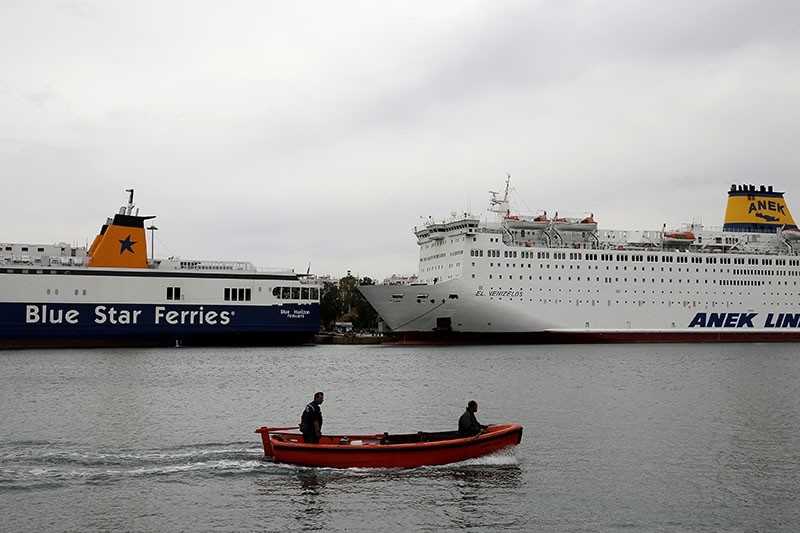 Two men sail in a wooden boat next to moored ferries during a 48-hour nationwide strike of Greek seamen at the Port of Piraeus, near Athens, Greece, May 16, 2017. (Reuters Photo)
by Compiled from Wire Services May 16, 2017 12:00 am

Greek seamen and journalists walked off the job Tuesday, a day before a nationwide general strike to protest new austerity measures the government is legislating for in return for more bailout funds.

The 48-hour seamen's strike will leave ferries servicing the country's islands tied up in port for two days. Journalists were holding a 24-hour strike, pulling news broadcasts off the air from 6 a.m. (0300 GMT).

The Panhellenic Seamen's Federation said it was asking "for the understanding and full support of both the traveling public and all Greek workers," adding that the new measures would lead seamen "to poverty and destitution."

News websites were not being updated, and no Wednesday newspapers would be printed. Journalists were to hold a protest rally outside their main union building later in the day.

Wednesday's general strike is expected to affect services across the country, from schools and hospitals to public transport. Air traffic controllers have declared participation with a four-hour work stoppage, leading to the rescheduling of 99 flights and the cancellation of a further nine by Greece's Aegean and Olympic Air.

No ferries were to sail in the Ionian and Aegean seas, the national coastguard confirmed. The stoppage affects islands that are main tourist destinations in Greece, and those without an airport will be effectively cut off from the mainland.

Other unions, including those for workers in public transport and state administration, also threatened strikes ahead of a parliament vote on a new austerity package set for Thursday.

In the past, strikes have affected tourists at border crossings, in transport and even museums.

Protest marches have been scheduled for central Athens in the morning.

Workers are protesting a new deal with Greece's international creditors that impose a raft of new tax hikes and spending cuts beyond the end of the country's third bailout in 2018. The measures will include additional pension cuts in 2019 and higher income tax in 2020.

Without the agreement with its creditors, Greece faced the prospect of running out of cash to service its debts this summer, which could have seen it have another brush with bankruptcy.

Greece is currently in its third international bailout, which is due to end in mid-2018. It has been dependent on rescue loans from its creditors — mainly other European countries that use the euro, and the International Monetary Fund — since its first bailout in 2010.

In return for the funds, successive governments have had to impose repeated waves of reforms, which have included tax hikes and salary and pension cuts.

The planned measures include pension cuts and tax hikes amounting to 4.9 billion euros (5.3 billion dollars) annually, which was a condition for continued financial support in a bailout by the country's international creditors.

Greece, which has been warding off bankruptcy over the past seven years, must in July repay more than 7 billion euros to the European Central Bank and the International Monetary Fund.

While the country's finances have improved under the bailouts and the strict supervision they imposed, the belt-tightening has led to spiraling poverty and unemployment rates.

Although the jobless rate has been falling from a high of above 27 percent, it still hovers at around 23 percent.