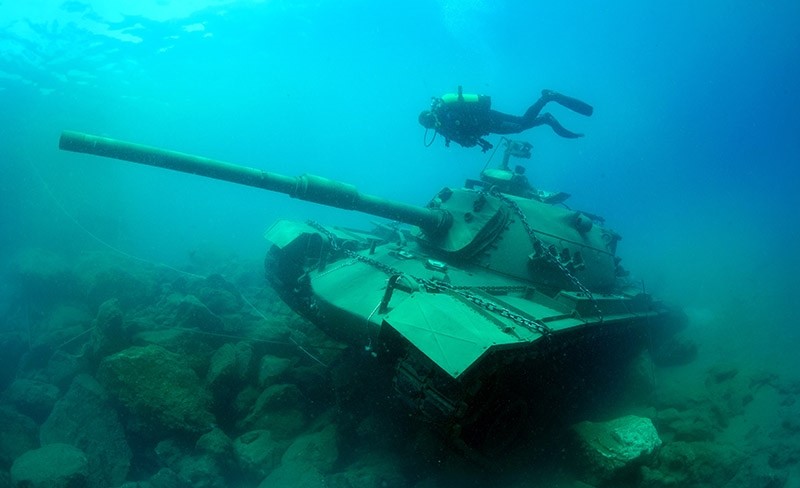 A model tank from 1960 is set to be submerged 20 meters underwater off the coast of the Mediterranean seaside resort of Kaş in Turkey's Antalya province, to serve diving tourism.

The U.S.-made 45-ton tank was previously stored hundreds of kilometers away in the Central Anatolian province of Konya.

The tank, procured from the Turkish military, has already been brought to Kaş and submerged 5 meters below the surface of the water at the town's marina, with the efforts of the Antalya Governor's Office.

In the event of suitable weather conditions, the tank will be carried to its next destination, Güvercin Island off the coast of Kaş, near where it will be submerged 15 meters deeper.

The tank, which completed its mission after serving the Turkish Armed Forces, is expected to contribute to the diving tourism.

Antalya Governor Münir Karaoğlu said the tank project was an important endeavor to make the province attract tourists for four seasons of the year.

"Aside from the many land beauties of Antalya, on a 650-kilometer-long shore, the province has also many beauties underwater. With such activities, we are trying to raise awareness in sub-aqua life and draw attention to beauties underwater in Antalya," Karaoğlu said.

Underwater photography director Tahsin Ceylan described such projects of submerging the tanks as "out of the ordinary." "Until today, we have seen many artificial reef projects such as [the submerging of] planes and ships. But, the [submerging] of tanks has been an uncommon project. Not only for our country, but also for foreign divers, the region is becoming an important center of attraction," Ceylan said.